NEW YORK (CNN) -- It's been a Monty Python world lately -- and we're not even talking about the absurdity and silliness of current events, such as balloon boys and confessional celebrities. 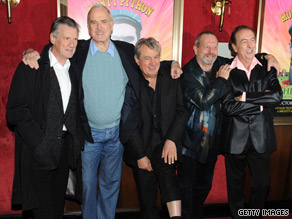 No, it's a Python world on TV, with the lads being showcased in a multipart IFC documentary -- which started this week -- and re-airing of their classic TV episodes and movies.

Last week, the paparazzi were out in New York to see the group, a bunch of self-confessed silly old men.

The five surviving members of Monty Python made a rare joint appearance at the premiere of the IFC documentary series, "Monty Python: Almost the Truth (The Lawyer's Cut)."

"There shouldn't be this sort of thing for being silly," Michael Palin said as he saw the chaos surrounding them on the red carpet leading into New York's Ziegfeld Theater, where "Almost the Truth" was set to debut.

Palin, along with John Cleese, Terry Gilliam, Terry Jones, Eric Idle and the late Graham Chapman, became comedic legends with the creation of "Monty Python's Flying Circus" 40 years ago this October. They produced 45 TV episodes for the BBC and five feature films together before going their separate ways in 1983.

Those broadcasts and shows still resonate among fans old and new. Many of today's comedians cite Python as a key influence, which can be seen in comedy including "The Daily Show" and "The Simpsons."

And many fans can quote some of the films chapter and verse.

"One of the embarrassing things is that the fans know these lines better than I do. So they come up and I have absolutely no idea, and I just nod and go ha ha, yeah," Cleese said.

But the fan base has spread past the original audience. "Kids of 10 or 11 now see Python as the cool thing. We're old enough to be their great-grandparents," Palin said.

The surviving members are still a little bemused about the whole phenomenon.

"It's kind of unreal," Palin said. "We did all of this when we were kids."

And according to him, the survival of Python is lucky in more ways than one.

"If we had gone out a week before, we would have been in black and white," Jones recalled. "We were in the first week of BBC doing color. So if we'd been made in black and white ... you wouldn't be watching the TV shows now, so that's lucky."

And that wasn't all, according to Jones: "We're also lucky because the shows were nearly wiped [erased] by the BBC."

He said in 1971 he got a call that the BBC was going to erase all of the original tapes to save money. "That is what the BBC did in those days; they wanted the videotapes to reuse." According to the documentary, Gilliam came to the rescue, buying the run of "Python" episodes before they could be erased.

Jones knows his history, past and present (he's a Chaucer scholar as well). But in the case of the Python documentary, he had a partner: The IFC's documentary series was directed and produced in part by his son Bill.

"This documentary is the result of greed and nepotism," he jokes.

The Pythons have aged pretty well, with all of them moving on to successful careers of their own, even as they continue to generate money from their Python properties.

"I'm making them money, and the ungrateful bastards never thank me," Idle joked. "Who gave them a million dollars each for 'Spamalot'?" It was Idle, who adapted "Monty Python and the Holy Grail" into the musical hit "Spamalot."

Several of them are feeling and looking their ages, which range from 66 to 70, pointed out Gilliam, the American Python. "There seems to be a lot of excitement, but I don't know who these people are. I've seen pictures of the Pythons, and none of these people look like those guys," he said.

Added Cleese, "We're a bunch of siblings, but it's not going to matter, we'll be dead soon."

The only Python who has passed away, Chapman -- who died 20 years ago -- has not been forgotten. At a joint question-and-answer session for the documentary, the five surviving Pythons made sure to include him with a cardboard cutout onstage.

For all the history, Idle said that this reunion isn't about being best friends with everyone.

"We weren't like the closest friends, but we spent a lot of time together in stupid costumes so it was more like a great football team where we played very well together."

He added, "When we get together, we do that now."