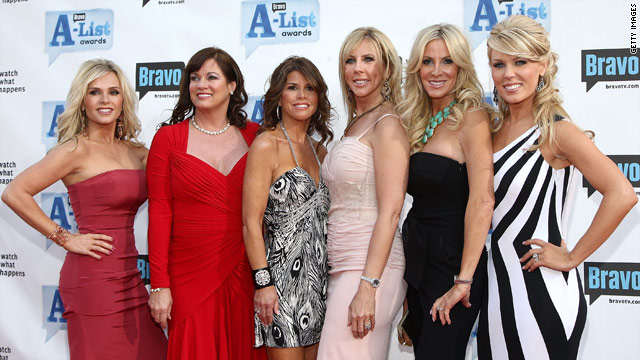 (CNN) -- Bravo's original "Housewives" begin their fifth season with some heady drama and a nod to tough economic times.

This season of "The Real Housewives of Orange County," which kicks off with an opener entitled, "When Times Get Tough, The Tough Go Shopping," features one housewife who could lose her home, one who could send her son to jail and is contemplating divorce and one who will find new love with a man who can't seem to commit. And one housewife will leave the show because of her financial instability.

Arguably one of the most popular characters, former Playboy Playmate Jeana Keough, 54, will only appear for three episodes this season. She is going through a divorce from former major league pitcher Matt Keough and is seen in the premiere episode struggling as a real estate agent to make ends meet.

In the show, Keough's 16-year-old son, Colton, has to give his mom a lecture on financial responsibility. She tells him, "It's weird to be in a place where you have to think before making a purchase." Keough then admits she could downsize her residence by roughly half, to a meager 5,000 square feet.

Facing these new economic realities and balancing a television show became too much for Keough during filming, and after the episode airing November 19 she leaves to try to pursue success without the cameras following her every move.

Fellow Housewife Tamra Barney admitted she wasn't sad to see Keough go. "She was always stirring the pot. She was the first one to go behind someone's back and cause trouble," Barney said. "I love her but she created drama."

Barney, 42, who joined the Housewives in the third season through a Bravo casting call, will try to hold her family together this season as her son Ryan, 23, faces jail time for unpaid traffic tickets. In the middle of all the drama with Ryan, she and her husband, Simon, will try to keep their marriage from collapsing under the pressures of the show.

"We were going through a hard time with the economy, and he is kind of a private person, so it was a big decision for him to keep doing the show," Tamra Barney said. "He held out for quite a while. You will see us trying to work things out."

The woman who holds everyone together is Lynne Curtin, but she and her family have their own problems as they face possible eviction from the Laguna Beach home the ladies gather in during the first episode.

In addition to losing their home, Curtin has other weighty topics to consider this season. The 53-year-old mother of two teenage daughters finally gets the face-lift she's been wanting for years.

"I went under the knife and I did it. It wasn't anything like I anticipated. I am thrilled I can put my eye makeup on and I don't have to hold my eyelids up," Curtin said.

Outspoken veteran Housewife Vicki Gunvalson will continue to build her growing insurance business and try her best to improve her relationship with her second husband, Donn, about whom she has pledged to no longer be so negative.

Gretchen Rossi, 32, finds a new love this season. After mourning the loss of her much older and much-divorced fiance, Jeff Beitzel, who died of leukemia in 2008, Rossi is finally ready to get back in the saddle and it is with someone who is very familiar to "Housewives" fans -- Slade Smiley. Slade is the ex-fiance of former Housewife Jo De La Rosa and also dated former cast member Lauri Waring Peterson.

"We're calling him the 'Housewife Hunter,' " Curtin said about Smiley. "We're going to get him a shirt made up that says 'The Hunter.'"

The wild card this season will be the newest cast member, Alex Bellino, a 32-year-old stay-at-home mom with three young children and a body, as Bravo describes it, that "defies all logic."

"I like her," Barney said. "She is just a really sweet woman, a mother and very opinionated, which is going to make her a very important player on the show this season ... especially with Vicki."