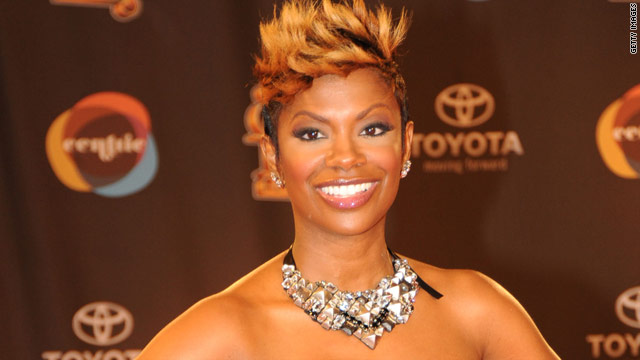 Kandi Burruss has had her personal life front and center after a season on "The Real Housewives of Atlanta."
STORY HIGHLIGHTS
RELATED TOPICS

(CNN) -- Not many people have had to grieve as publicly as Kandi Burruss.

The "Real Housewives of Atlanta" cast member said she appreciates all the love and support she's received from fans since the death of her former fiancé, Ashley "A.J." Jewell, though it's been hard for her to deal with having her emotions aired so publicly.

"That was super difficult," Burruss said in a telephone interview Friday. "Everybody wants to grieve with you. Everybody feels like you should be breaking down in tears."

"It's hard dealing with all of that stuff and everybody knows," she added. "When it comes to stuff like that, I don't like being sad and being all emotional in front of people."

The singer-songwriter shed some tears during the two-part reunion of the hit Bravo show as she recalled learning that Jewell had died after a fight at a club.

The moment was one of few in the finale that some fans felt actually demonstrated any emotion, given the subdued manner of the other Atlanta "Housewives."

There were even a few times that some cast members chose to be silent rather than answer uncomfortable questions.

Burruss said she believes cast mates Kim Zolciak and NeNe Leakes had decided before the reunion to not get dramatic on the show despite the best efforts of host Andy Cohen to draw them out.

"Housewives" producers were not thrilled with the more reserved atmosphere, Burruss said.

"[The producers] were really kind of upset because they felt that even though nobody wanted to be dramafied, at least you can answer the questions honestly," she said. "You don't have to be overly negative to answer a question.

"People want to know how you felt at the time that it happened, even if you aren't feeling that way now," Burruss continued. "You can't just go from being over the top to being a nun."

Burruss said she's happy with both the way she was portrayed on the show and the response fans have had to her.

She was initially concerned, she said, that fans might turn on her because she and Leakes did not get along.

"I knew she had so many fans from last year, I was feeling like a lot of people were not going to like me because I got into it with their favorite [cast member]," Burruss said. "I'm glad it turned out the way it did, because I was really scared."

Burruss' mother, however, was not as pleased with her portrayal. Viewers witnessed a great deal of friction between her and Jewell because she disapproved of his match with her daughter.

"My mom didn't like the fact that a lot of people blamed her for the breakup," Burruss said. "She felt like there was a lot of things that people didn't get to see or maybe didn't know about our relationship that may have contributed to the breakup."

Despite the pressures of being on reality television, Burruss said she has no regrets.

She has forged a friendship with Zolciak, for whom she produced the single "Tardy for the Party."

"I watched the show last season, so I knew what everyone felt about her voice," Burruss said. "I felt that doing a song with her, either it could go really, really great, or really, really bad, but I am definitely happy that the song turned out great."

The success of that song has allowed Burruss -- a former member of the successful group Xscape and a Grammy-winning songwriter -- to display another layer of her musical talent, she said.

"This was the perfect opportunity to show people what I can do, what I'm capable of," she said. "A lot of people didn't really know what I was doing behind the scenes, and I felt this show definitely gave me the stage to show people everything I can do, even with acting."

Burruss said she is in negotiations to return for a possible new season of "Housewives."