PORT OF SPAIN, Trinidad (CNN) -- The big winner out of this week's Summit of the Americas in Trinidad may be a decades-old book about the exploitation of Latin American people throughout history. 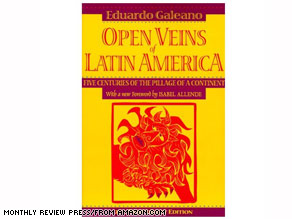 Venezuelan President Hugo Chavez, whose anti-U.S. rhetoric has included calling former President George W. Bush the devil, approached Obama Friday and handed him a copy of "Open Veins of Latin America: Five Centuries of the Pillage of a Continent."

The book topped Amazon's "Movers and Shakers" list on Saturday -- with a reported 466,378-percent increase in popularity on the site.

It was at least the second time Obama and Chavez spoke at a summit during which Obama made overtures to improve U.S. relations with many of its Latin American neighbors.

After receiving the gift, Obama jokingly said he thought it was a book Chavez had written.

"I was going to give him one of mine," he quipped.

Asked if the encounters with Chavez were paving the way for a meeting, Obama simply responded, "I think we're making progress at the summit."

However, former U.S. ambassador Jeffrey Davidow, an advisor to the president, noted that "a shake and a smile does not constitute a new relationship."

"The president was in a meeting with 33 other heads of state," he said. "He shook hands and smiled, I think, with all of them."

Written in the early '70s and reissued in several new editions since then, the book is an "analysis of the effects and causes of capitalist underdevelopment in Latin America," according to one reviewer, who called it a "passionate account of 500 years of Latin American history, written with drama, humor, and compassion."