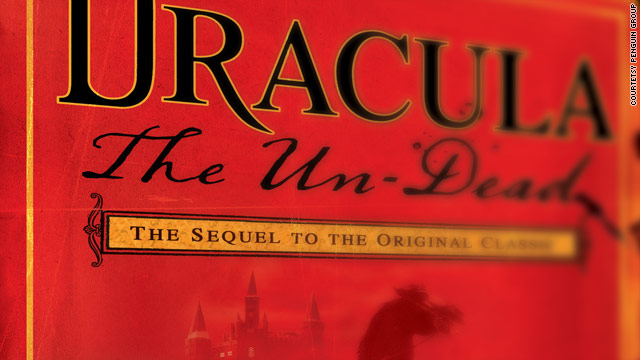 Tell those bayou bloodsuckers from "True Blood" to step aside, too.

More than 112 years after he first climbed out of the coffin, the world's most famous vampire is back -- and he's bloodier than ever.

"Dracula the Un-Dead," released this month in the United States, is a sequel to Bram Stoker's 1897 classic written by Dacre Stoker, the original author's great-grandnephew.

The book, co-written by Dracula historian Ian Holt, picks up 25 years after the Victorian-era monster is supposedly killed in the original and is based in part on 125 pages of handwritten notes that Bram Stoker left behind.

But while many of the original characters are here -- troubled couple Jonathan and Mina Harker and vampire hunter Van Helsing among them -- the horror has gotten a 21st-century update. The sex and violence that Stoker deftly alluded to in the original are, at times, front and center in his descendant's sequel.

"You've got to keep in mind the perspective," said Dacre Stoker, a native of Montreal, Quebec, now living in Aiken, South Carolina. "The degree of sex and violence he had, in this very stuffy and conservative Victorian society, was cutting edge at the time. Even the exposure of a woman's flesh, the piercing of the flesh, was a metaphor for the sex act."

And with authors from Anne Rice and Charlaine Harris to Stephen King and Poppy Z. Brite having crafted their own, sometimes lurid, reworkings of the vampire legend, Stoker said he knew that the new book couldn't just be a straight continuation of the first.

"We've got to keep up with what other people are doing," he said. "Otherwise, our story would be toast."

Of all the books, movies and other tales to use Dracula's name throughout the decades, the novel is the first since the 1931 Bela Lugosi movie to have the Stoker family's endorsement and input.

After Bram's death, his widow, Florence, sold the story's rights, and eventually, the most iconic character in the history of horror slipped into the public domain.

Dacre said that before now, the only thing he'd ever received for his ancestor's work was the occasional Halloween wisecrack.

"We knew of the legacy of Bram Stoker, but as kids growing up in Montreal, it wasn't that big a deal," he said. "Every now and then at Halloween you'd get joked: 'Is it safe to come to the Stoker house? Are we going to get candy or bitten in the neck?' "

It was a college writing project that revived his interest in his novelist ancestor, a native of Dublin, Ireland, who'd moved to London, England, by the time the book was written.

Then, he was contacted by Holt in 2003. The historian said he wanted to work on a sequel and wanted to have a member of Stoker's family involved.

Along the way, they uncovered a rare find at the Rosenbach Museum and Library in Philadelphia, Pennsylvania: Bram's own notes.

It wasn't a plot outline, Dacre said, "but what I did was find information, characters, little ideas -- plot threads that he had in mind 112 years ago that didn't make it into his story."

Among the seeds for new plotlines was Bram's mention of a police investigator who plays prominently in "Dracula the Un-Dead." Dacre said he'd always wondered at how the first book was full of murder but no police were involved.

The notes also prompted the inclusion of Jack the Ripper, whose gruesome exploits gripped London around the time the elder Stoker was writing his novel and who is believed by some historians to have helped shape its plot.

True fans of the vampire genre will find another historical figure they're likely familiar with gracing the book's pages and an even more unlikely appearance: Bram Stoker himself.

"Part of our plan was to paint a realistic picture of Bram Stoker," Dacre said of the author, who spent time as a reporter, theater critic and manager of London's Lyceum Theater. "Everybody knows Dracula. Not many people know Bram Stoker."

Response to and reviews of the book have been largely positive.

Dacre, who is touring the United States in support of the release, said he was prepared for the inevitable backlash from pure-blood purists who don't think the original should be sullied with a follow-up.

"I have heard just a bit of it," he said. "People say it's better to leave some of these mysteries alone; let's not solve them all. Believe me, when you read our story, you'll know we don't solve them all."

And he has some other advice for those diehards: Lighten up.