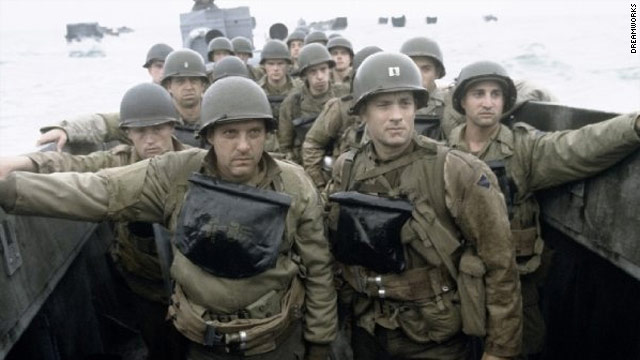 (CNN) -- Some reviewers have called "Saving Private Ryan," Steven Spielberg's World War II film about D-Day and the search for a soldier, one of the greatest war movies.

Not only is it not the greatest war movie, it's not even the best cinematic depiction of D-Day, says Beevor, author of the newly published "D-Day: The Battle for Normandy" (Viking).

He admires the famed Omaha Beach opening -- "Probably the most realistic battle sequence ever filmed," he said -- but described the rest of "Saving Private Ryan" as "ghastly."

"It's sort of a 'Dirty Dozen' cliche of the worst form," he said.

He has expanded on the criticism in a lecture. "Spielberg's basic story line had great potential. It shows the tension between patriotic and therefore collective loyalty, and the struggle of the individual for survival: those mutually contradictory pressures, which in many ways lie at the heart of war," Beevor observed in the talk.

If any filmmakers wish to take on D-Day again, Beevor's book provides enough material for a dozen screenplays. Making use of first-person accounts stored in the National Archives, as well as a wealth of other material, Beevor depicts in painstaking detail not only the D-Day landings by American, British, Canadian and Free French forces, but also the subsequent battle for the whole of Normandy that proved pivotal in defeating Nazi Germany.

Beevor says a director would do well to remember that the Allied effort to retake the continent extended well beyond that single day of June 6, 1944.

"D-Day, although an iconic moment, was not actually the end of it. Films like 'The Longest Day' and 'Saving Private Ryan' almost give the impression that D-Day was 'it' and then the next thing people know about was the liberation of Paris," he said. "But in fact it was the fighting in Normandy which was far worse. Casualties on D-Day were far lighter than expected -- [military leaders] had expected 10,000 dead and only 3,000 died.

"The real fighting and the real casualties," he added, "came in the Battle of Normandy."

So what does Beevor prefer in the way of a Hollywood treatment of D-Day? Another project Spielberg had a hand in, "Band of Brothers."

"On the whole I think [it] was pretty close to the truth," Beevor said of the 2001 HBO miniseries, which Spielberg and Tom Hanks executive produced. He called it "incomparably more realistic" than "Saving Private Ryan."

"The improvement was presumably due to the fact that it was a pretty faithful adaptation of the book by Stephen Ambrose," he said.

A major problem with "Ryan," Beevor said, is the climax of the film. "The U.S. Air Force arrives in the nick of time just like the U.S. cavalry in 1950s cowboy films. And to cap it all, the final frames are of Pvt. Ryan, standing in old age amid the rows of white crosses in a military cemetery, saluting his fallen comrades as tears run down his cheeks."

But then again, the historian believes Hollywood is not well cast in the role of purveyor of history.

"The central problem is that historical truth and the needs of the movie and television industry remain fundamentally incompatible. Hollywood has to simplify World War II according to set formulae," Beevor said in his lecture. "Its films have to have heroes and of course baddies. There are seldom shades of gray."

Among WWII films, Beevor praises two from 2006 directed by Clint Eastwood (and produced by Spielberg), "Flags of Our Fathers" and "Letters from Iwo Jima".

"But they are the exception which proves the rule that you do not need to resort to the tricks, the false claims of truth and even the clichés of the platoon movie," he said.

And the best war movie? Beevor looks away from Hollywood for his answer: 1965's "The 317th Platoon," a French film set during that country's war in Indochina.