(CNN) -- Local favorite Stijn Devolder retained his Tour of Flanders title under clear blue skies on Sunday, powering away from his rivals for a comfortable victory in the 261.5km spring classic in northern Belgium. 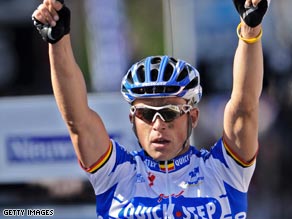 Devolder crosses the line alone to win the Tour of Flanders spring classic for a second year in succession.

The Quick Step rider made light of one of the toughest tests in cycling to break away with 15km remaining, finishing nearly a minute ahead of Germany's Heinrich Haussler (Cervelo) -- with Silence-Lotto rider Philippe Gilbert third.

Belgium's premier race, which features 16 steep climbs -- many of which see the peloton ride over bone-jarring cobbles -- was brought to life with 50km remaining when Italian Manuel Quinziato, Frenchman Sylvain Chavanel and three-time runner-up Leif Hoste led a six-rider breakaway.

However, they were gradually caught by race favorites Devolder, compatriot and dual winner Tom Boonen and Italian Filippo Pozzato.

Devolder made his decisive move over the crest of the penultimate climb, the Muur-Kapelmuur, and by the time he had reached the final climb, the Bosberg, he had an unassailable advantage.

The rest of the breakaway riders were eventually caught by the peloton and German Haussler won the sprint for second place which was marred by a nasty crash on the final straight into Meerbeke.