(CNN) -- Half-centuries from Jacques Kallis and AB de Villiers proved decisive as South Africa eased to a 25-run victory over Australia in the third one-day cricket international in Cape Town. 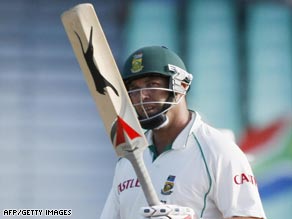 Kallis and De Villiers shared a 114-run partnership for the third wicket to rescue the home side from early trouble to post 289 for six.

The tourists struggled in their chase, with Callum Ferguson (63) and James Hopes (63 not out) only briefly threatening as outstanding fielding and Roelof van der Merwe's three for 37 restricted them to 264 for seven.

They made a solid enough start in their response, reaching 30 before the first wicket fell -- Brad Haddin run out via a direct hit from JP Duminy fielding at cover.

Captain Ricky Ponting survived two near misses before finally perishing for 20 caught and bowled after being outfoxed by a flighted delivery from Johan Botha.

Van der Merwe was introduced and he struck a double blow in his third over, bowling Michael Clarke (35) and trapping Michael Hussey (one) leg before wicket, despite the batsman getting a big inside edge.

Duminy too was an instant hit when he was brought on to bowl, claiming the wicket of David Hussey (20) with his second ball, caught at long-on by Dale Steyn as Australia fell to 114 for five.

Ferguson brought up his fifty in 59 balls and shared a 97-run partnership with Hopes, perishing to Van der Merwe, caught by De Villiers running back from cover.

Another brilliant piece of fielding by Duminy in the deep accounted for Mitchell Johnson (nine) being run out as Australia fell well short.

Earlier, after winning his first toss of the series and electing to bat, South African captain Graeme Smith was sent on his way in the seventh over when he walked down the track to Johnson (four for 34) and edged a seaming delivery behind to Haddin.

Herschelle Gibbs was next to go when he holed out to a good catch by Hopes at deep mid-wicket off Nathan Bracken.

But in company with De Villiers, Kallis reached his fifty from 69 balls. And Kallis soon followed him to a half-century, at a marginally quicker tempo.

Johnson then removed De Villiers for 80 with a slower delivery that took a leading edge and was snapped up by Nathan Hauritz at mid-off.

After Duminy had smashed Johnson straight to Michael Hussey at cover, Boucher and Morkel plundered late runs to set a respectable score.