(CNN) -- Dinara Safina will go to the top of the world rankings in place of Serena Williams after the American's shock defeat at a tournament in Spain, the WTA announced on its official Web site www.sonyericssonwtatour.com. 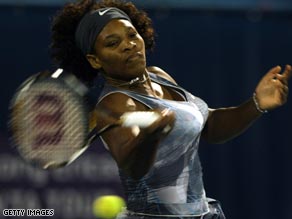 Williams crashed out in her first clay-court match of the season in the Andalucia Open.

Williams went down 6-4 3-6 6-1 to Klara Zakopalova at the Andalucia Open in Marbella which means the Russian will go to world number one in the ranking lists released on April 20.

Safina is only the second Russian woman, after Maria Sharapova, to claim the top spot and it will match the achievement of her brother Marat who was the top men's player in the world in 2000.

Safina has been elevated to the status without winning a grand slam and wants to prove herself over the coming months.

"There's no question that while I am very proud of my results over the past year, I would have liked to reach this achievement in a different manner," she told the official Web site.

"I hope to prove to everyone over the coming months that I merit the honor of being world number one.

"It is even extra special for me since my brother Marat was able to reach the number one ranking and I am happy to share this achievement with him."

Williams, who was top of the rankings for 11 weeks after beating Safina in the final of the Australian Open, was hampered by a thigh injury as she lost to Victoria Azarenka in the final at Key Biscayne on Saturday.

She then flew to Spain for the clay court tournament but never got to grips with the surface in going down to Zakopalova.

Williams is defending champion at the Family Circle Cup next week, but regardless of the result in South Carolina under the way rankings operate she will lose out to Safina.

The Russian, who has won four WTA Tour titles in the past year and reached the finals of the French and Australian Opens, becomes the 19th women's world number one since the modern rankings were introduced, the first Chris Evert.

Meanwhile, Zakopalova continued her run in Andalucia by defeating fellow-Czech Renata Voracova 7-6 5-7 6-0 to reach the third round.

The biggest name left in the competition is second seed Jelena Jankovic, and the former world number one cruised into the third round with a 6-3 6-0 victory over Tunisian Selima Sfar.