(CNN) -- Tour de France champion Carlos Sastre came home alone to win his first-ever stage in the Giro d'Italia on Monday, a gruelling 237km slog from Pergola to Monte Petrano in the Appenine mountains, to put himself in contention for overall victory. 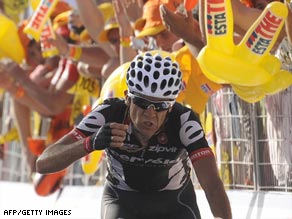 Sastre crosses the line first after a gruelling seven hours in the saddle to win Tuesday's 16th Giro stage.

The Spaniard powered away from his rivals on the final 10.4km climb of Monte Petrano, catching Yaroslav Popovych and Damiano Cunego -- the last two members of an early breakway -- in the process, after over seven hours in the saddle.

The 16th stage victory lifted Sastre up to third in the overall standings, just two minutes and 19 seconds behind Denis Menchov, who retained his race leader's pink jersey after finishing second on the day.

The day's action was marked by a Popovych-led breakaway shortly after the start, with Sastre reeling in and passing the Ukrainian escapee less than three kilometers from the line.

With the race favorites grouped together Popovych, accompanied by around 20 other riders at one point, slipped clear, opening-up a four minute gap with 35km remaining before Sastre got to work.

However, it proved a disastrous day for American Levi Leipheimer, who finished over three minutes down to slide from third to sixth in the overall standings.

Astana team-mate Lance Armstrong appeared stronger than his compatriot, with the seven-times Tour winner having to nurse his shattered compatriot to the line.

Tuesday is a rest day and with five stages still remaining -- including the massive climb to Blockhaus on Wednesday -- the race is likely to still see more twists and turns.