(CNN) -- The British and Irish Lions maintained their unbeaten record in South Africa but were given an almighty scare by the Cheetahs before winning 26-24 at Vocacom Park in Bloemfontein. 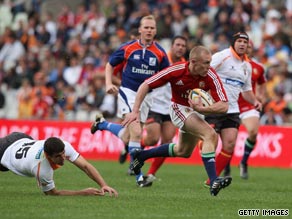 Ireland's Keith Earls powers over for the Lions' second try in their victory over the Cheetahs.

The Lions opened up a 20-0 lead by midway through the first half, but were left holding on after the home side made a three-try comeback.

They had their hearts in their mouth in the last minute as Louis Strydom's drop goal attempt from the halfway line narrowly missed.

But it was a far from convincing performance against the bottom side in the Super 14 and a letdown after the 74-10 victory over the Golden Lions in midweek.

Ireland stars Stephen Ferris and Keith Earls both went over for converted tries in a superb start for the Lions, adding to an earlier penalty scored by James Hook.

Ferris, who also scored one of the Lions 10 tries in Wednesday's romp, pounced to run clear from 40 meters, his effort converted by Hook.

Earls picked up a kick ahead by Welsh flyhalf Hook to go over for the second try.

After Hook's second penalty, it looked all over another rout, but Ferris was sent to the sin bin, the Cheetahs scored two tries of their own inside 10 first half minutes.

Winger Danwel Demas went over in the corner and prop Wian du Preez charged over for the second, both converted by Jacques-Louis Potgieter.

But Hook kicked his third penalty to give the Lions a 23-14 halftime lead.

Potgieter cut the lead to six points with a 50-meter penalty but Hook took his personal tally to 16 points with another penalty to make it 26-17 with 30 minutes to go.

The Lions could not take advantage of territorial advantage, but Wales wing Shane Williams saw his pass intercepted by Corne Uys who raced 80 meters to go over for a converted try.

Argentina flyhalf Juan Martin Hernandez scored all 15 points for his side who lost the world number five ranking to England after the first of a two-Test series.