LONDON, England (CNN) -- The court battle may finally be over, but there is still a great mystery hanging over the next America's Cup event: What will the holders use to defend the trophy? 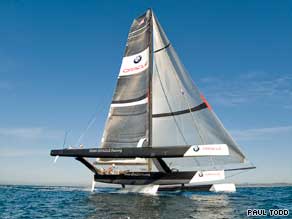 Established in 1851, the America's Cup is the oldest active trophy of any sport and by far the most prestigious match race sailing event in the world.

Scheduled for February 2010, the 33rd edition of the America's Cup will be contested by the holders -- Swiss syndicate Alinghi, and U.S. challenger Oracle, owned by Larry Ellison.

The date follows protracted court battles which saw both teams fighting over the terms of the next event.

Last month's New York Supreme Court ruling which finally decided the terms and date of the regatta also announced that the contest is to be decided in a one-off series in multihull boats.

While Oracle revealed a 90 ft trimaran last year, defenders Alinghi are still building their boat for the event -- and they are refusing to give away any secrets about it.

CNN's MainSail show visited the Alinghi base in Switzerland to try to catch a glimpse of the mystery vessel -- but they came no closer to seeing the boat under construction.

MainSail presenter Shirley Robertson only got as far as the compound gates in her quest to see the vessel.

Watch video of CNN visiting the Alinghi team base »

The team's design co-coordinator, Grant Simms, told CNN that the design would not be revealed until the latest possible point.

"It's quite unusual and we are trying to keep it a secret as long as we can.

"We are hoping to stop our opponents from seeing it and reacting to it," he said.

The design of the boat is generally a crucial part of any America's Cup regatta -- and none more so than this one, where a different type of boat is being introduced.

Also, the size and shape of the boat could indicate where the regatta may be held -- something that doesn't need to be announced by defenders Alinghi until six months before it is set to begin.

The cup holders can set the terms of the next defense, in conjunction with the "challenger of record" -- whichever team signs up as the first challenger.

This is important as different locations can have a wide variety of wind strengths and sea swells, which can suit varying sizes of boat and types of sail.

You can watch this month's MainSail show in full on CNN International or on the MainSail Web site from Thursday 18th June.