(CNN) -- World champions South Africa held off a gallant British and Irish Lions fightback to claim a thrilling 26-21 victory in the opening Test match in Durban. 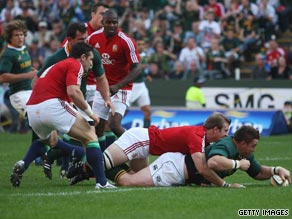 Captain John Smit goes over for the Springboks' opening try in their 26-21 victory over the Lions.

The Springboks, inspired by some impressive forward play -- particularly in the scrum -- looked to be cruising to a comfortable win as they led 26-7 with just 12 minutes remaining.

But the match-fit Lions, who had won all six of their games prior to Saturday's opening Test, scored two late tries against the visibly-tiring home side --who were hanging on when the final whistle was eventually blown.

The match started superbly for the hosts, who battered the Lions into submission to take an unbeatable-looking advantage early on.

Captain John Smit and Heinrich Brussow both scored first-half tries as the Springboks bossed the forward battle, with prop Tendai Mtawarira in destructive form, forcing the Lions to concede a string of controversial penalties which eventually proved decisive.

However, the Lions hit back in a defiant final 20 minutes, with Englishman Tom Croft continuing his superb Lions tour by adding a second try to add to his first-half effort, while Welshman Mike Phillips also darted under the posts.

But it proved too little too late as the Springboks took charge of the series. The defeat could also prove to be a bad omen for the Lions, who have only once won a series after losing the opening Test, in Australia 20 years ago.

"The scores from the penalties killed us," Lions captain Paul O'Connell told Sky Sports. "We out-scored them by three tries to two and are very encouraged for the rest of the series.

Lions coach Ian McGeechan added: "With eight minutes to go, I thought we were still going to nick it. We gave ourselves a mountain to climb in the first half, but after the break were were superb.

"We had about 60 per cent of the ball and had them on the back foot, but those early penalties really killed us. Saying that, I am very proud of the rugby that we played -- the players were superb."