(CNN) -- The British and Irish Lions completed the provincial side of their tour of South Africa without defeat after securing a 13-13 draw against The Emerging Springboks at Newlands stadium in Cape Town. 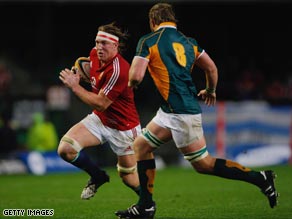 In stormy weather conditions Willem de Waal kicked a difficult conversion in the dying seconds for the Boks, a team that acts almost as reserves for the main South African international squad, to bring the two sides level.

The kick followed a last-minute try by Danwel Demas, whose score reined in the tourists' hard-fought lead of 13-6.

The Lions had looked the dominant side early in the game but fell away dramatically as the match continued and the poor weather and heavy pitch took their toll.

"It was a potential banana skin we got through," said Lions head coach Ian McGeechan told AFP, who had been keen to see his aside win after their 26-21 defeat in the first Test against South Africa on Saturday. Who are the Lions?

"We were disappointed with the try at the end, but the conditions were always going to be a leveler.

"It's a million miles from what we want to be playing on the weekend," McGeehan added in anticipation of the second Test against South Africa at Loftus Versfeld.

"It was actually a very strong defensive performance if you take the last minute away but we always look and learn a bit. There were some good performances.

Dick Muir, the coach of the Emerging Springboks added: "It felt like a win in the end. It was a real game of two halves in conditions more suited to the Lions than us."

More bad news for the Lions came with confirmation that lock Nathan Hines was given a one-week ban for a foul tackle on Wilhelm Steenkamp in the game.

The Scotland international dropped Steenkamp to the ground and was given the suspension by Canadian judicial officer Alan Hudson at the Western Province Rugby Union offices in Cape Town.