(CNN) -- The LPGA Tour is seeking a new leader after controversial Commissioner Carolyn Bivens handed in her resignation following a display of player power. 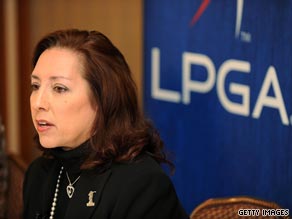 It announced on Tuesday that Rear Admiral Marsha J. Evans, a member of the board of directors, would stand in until a replacement could be found.

Retired former world No. 1 golfer Annika Sorenstam will be helping the board in its quest.

"We'll soon have in place a Commissioner to lead us into 2010 and beyond, but until then, it's important that we immediately appoint an Acting Commissioner whom we know and trust," chairman Dawn Hudson said.

"As a board of players and independent directors, we wanted an Acting Commissioner with experience leading large organization, one who appreciates and listens to our player members and tournament owners, understands sponsors and their challenges and needs, and has a track record that commands respect."

Bivens stood down a day after the U.S. Women's Open was won by South Korea's Eun Hee Ji, with the build-up to the tournament having been largely overshadowed by the row.

World No. 1 Lorena Ochoa had been among 15 leading players who a week earlier signed a letter to the tour's board of directors calling for Bivens to step down.

The 56-year-old had been in charge since 2005, when she became the first woman to hold the role in the LPGA's 55-year history.

The appointment was not popular, with seven high-ranking LPGA executives quitting in her first eight months in charge.

She courted controversy last year when she announced an "English-only" speaking policy for players on the tour, which has become increasingly international with 45 players from South Korea alone -- and many have been claiming regular victories.

The LPGA was forced to backtrack following storms of protest and bad publicity.

In May, Bivens was criticized after being quoted as saying that players should use the social networking Web site Twitter during tournaments to keep fans updated with their progress. The LPGA quickly released a statement claiming she had been misquoted, but it raised the ire of the players.

With difficult economic times, the tour has lost some key sponsors and tournaments -- there are only 10 events scheduled in the U.S. for next year.

During Bivens' tenure, the LPGA acquired the developmental Duramed FUTURES Tour and ownership of two tournaments: the LPGA Championship and the ADT Championship, which this year was canceled due to its sponsors' financial problems.