(CNN) -- Denmark's Nicki Sorensen won the 12th stage of the Tour de France as the Rinaldo Nocentini kept the yellow jersey ahead of Astana teammates Alberto Contador and Lance Armstrong. 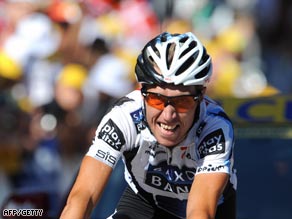 Sorenstam is all smiles after crossing the line to claim the 12th stage in Vittel.

Sorensen was part of a seven-strong breakaway group which established a big lead over the main bunch on the 211.5km stage from Tonnerre to Vittel and eventually contested the stage honors.

The 34-year-old Dane, a support rider for the Saxo Bank team, timed his final attack perfectly in the closing kilometers and had a 33 second advantage by the finish.

"I think I did the perfect race and felt very strong at the end," he told Eurosport TV after claiming his first victory in the Tour de France.

Britain's Mark Cavendish again proved his supremacy as the bunch came in over six minutes down, easily outsprinting main rival Thor Hushovd for eighth place to stretch his lead in the battle for the green jersey.

Nocentini remained six seconds ahead of Contador with Armstrong two seconds further back as all finished safely in the main bunch.

But Tour contenders Levi Leipheimer of the Astana team and Silence Lotto's Cadel Evans both crashed in the closing stages.

Neither lost any time because it occurred within the final three kilometers and neither appeared seriously injured as they rode home with teammates.

Friday's 13th stage goes from Vittel to Colmar with the first category Col du Platzerwasel in the Vosges region a likely testing ground for the overall contenders as Nocentini bids to keep the yellow jersey.