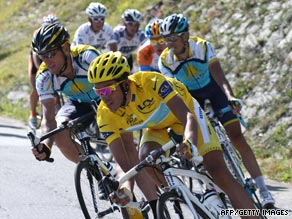 Astarloza, captain of the Euskaltel-Euskadi team, finished six seconds clear of Sandy Casar and Pierrick Fedrigo after breaking free near the end of the 159-kilometer 16th stage from Martigny to Bourg St Maurice.

Contador was near the head of the 17-man peloton in 10th place, 59 seconds back from his fellow Spaniard, with seven-time champion Armstrong registering the same time in 12th.

Britain's Bradley Wiggins retained third place as he finished right in behind the American veteran Armstrong.

However, Australia's Cadel Evans -- the race runner-up for the past two years -- dropped out of overall contention with a poor 46th placing, falling to more than seven minutes behind Contador.

Armstrong had briefly looked like also losing ground on the peloton but recovered well on the day's second climb, up the Col du Petit St Bernard, to rejoin the pack about 2km from the summit.

At the top, Contador's group was two minutes and 15 seconds behind the leaders, while Evans and defending champion Carlos Sastre crested the second climb four minutes behind.

Jens Voigt crashed heavily on the descent, while up ahead Franco Pellizotti, Astarloza and Jurgen Van Den Broeck had a lead of 15 seconds on Nicolas Roche, Stephane Goubert, Casar and Fedrigo.

Amael Moinard attacked the leaders but was quickly reeled in before Astarloza made his move with 2km to go and picked up a comfortable maiden stage win, with Casar claiming second for the sixth time of his Tour career.

Fedrigo, Roche, Van Den Broeck and Moinard also finished six seconds behind the winner, while Pellizotti increased his lead in the climbing classification as he finished seventh -- 11 seconds adrift alongside Stephane Goubert.

Astarloza, who was ninth overall in 2007, was delighted after giving his team a first stage victory in eight years.

"I'm super happy right now -- I had the strength to finally win a stage of the Tour de France," he told the race's official Web site.

"I've only got a small resume of results and there's not a lot of victories on it, but this goes right to the top of the list. I'm not finished with yet because I still feel like I've got a bit of strength in my legs and, of course, we all benefited from the rest day yesterday.

"But I'm always prepared to see what I can do. It's never easy to attack a small group of riders, especially after such a rapid descent and against others who were also very strong.

"I had a look around to see how the others responded to Moinard's attack and I seized the chance and went as hard as I could. I was in a good position for the win and this is a day that I'll remember for a long time.

"I didn't want to risk it and have our group come into the finish for a sprint because that's not my strength, so I wanted to give it all a few kilometers before the line."

"I'm not happy with how the stage went, I can say that much. We tried and I'm sorry but I'm a bit tense right now because I'm worried about Jens," said Schleck, who placed 19th -- one ahead of his brother Frank.

"I just hope that he's okay. I don't really care too much about anything else right now. I only knew about Jens when I came into the finish. I was told he had been in a big crash."