(CNN) -- Alinghi will defend the America's Cup against U.S. challenger Oracle in the United Arab Emirate of Ras al-Khaimah next year. 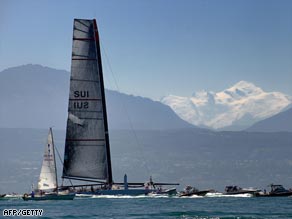 Alinghi's America's Cup yacht was unveiled on Lake Geneva with Mont Blanc in the background.

The Societe Nautique de Geneve, the home club of the Swiss syndicate, made the official announcement on Wednesday. As the defender, the 2003 and 2007 winners had choice of venue.

The battle for the 33rd staging of yachting's most prestigious trophy will begin on February 8, the culmination of a protracted legal battle in the U.S. courts over the rules for the competition.

It has led to an unusual head-to-head battle for a trophy which was first contested in 1851 and expanded into a multi-national competition with the last edition hosted by the Spanish port of Valencia.

Due to the time of year and perceived favorable conditions, Alinghi have opted for the waters off the smallest of the seven emirates.

"Well we looked everywhere for a venue that suited having good racing and really the whole push was to find a place that we could race on those dates in February," said Alinghi's New Zealand skipper Brad Butterworth.

"It's got a great building sea breeze during the day and it's good for these boats to be able to sail them non-stop most days," he added.

Alinghi, backed by the Swiss billionaire Ernesto Bertarelli, have just unveiled a massive 90-foot catamaran for the America's Cup, a radical departure from the usual smaller boats that have been used for recent editions.

Bitter rivals Oracle, who have their own billionaire backer in software magnet Larry Ellison, have been testing a huge 90-foot trimaran off San Diego for several months.

Oracle represent the Golden Gate Yacht Club of San Francisco, who were installed as the official challenger of record by a ruling in a New York court earlier this year.

The two syndicates will be based in a specially-built marina and luxury resort on the coast of the Persian Gulf with no expense being spared.

"It is a great moment for us to host the America's Cup here. It is significant because it reflects how the emirates have become a place for hosting international events," said Sheikh Saud Bin Saqr Al Qasimi, Crown Prince of Ras al-Khaimah.

Racing will be in a best-of-three format, again a departure from recent America's Cup competitions which have lasted several months with hopeful syndicates racing off against each other in a challenger series before taking on the defending champion.