(CNN) -- South Africa strengthened their grip on the Tri-Nations with a 29-17 victory over Australia in Cape Town on Saturday. 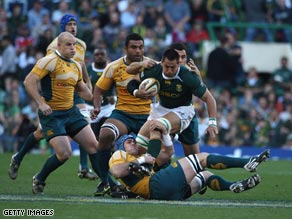 The Springboks charge forward in their 29-17 victory over Australia at Newlands.

It was the third straight win for the world champions, who were indebted to the boot of Morne Steyn as he totaled 24 points with seven penalties and a drop goal at Newlands.

The Wallabies took a surprise lead in the second minute as Ashley Cooper barged over for a try with Matt Giteau converting, but the home side slowly took command.

Steyne kicked three penalties in the space of six minutes to put them ahead and added a fourth after Berrick Barnes had restored Australia's lead with a drop goal.

Steyne then sent over a drop goal of his own and South Africa moved further ahead as Victor Matfield went over for their only try of the match.

With the Wallabies reduced to 13 men as Giteau and Richard Brown were sin-binned, Steyn took advantage with another penalty to put them 23-10 ahead at the half.

Steyn added his sixth penalty shortly after the break, but Giteau charged through for a try and converted his score to give them hope at 26-17.

Victory continues a fine run of form for the Springboks, who beat the British and Irish Lions 2-1 in a thrilling series which preceded the annual Tri-Nations tournament.