(CNN) -- A dejected Michael Schumacher described his aborted return to Formula One as his "toughest moment" after a neck injury left him unable to drive for Ferrari in the European Grand Prix as a replacement for Felipe Massa. 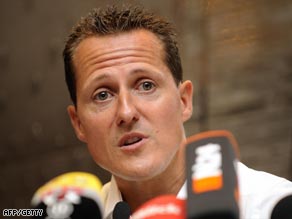 Schumacher spoke of his disappointment as he explained his decision to abort his return.

The seven-time world champion told a televised press conference on Wednesday that he was so disappointed that he was unable to even think about reviving his comeback hopes later this season.

Massa, who suffered serious head injuries in a qualifying crash at the Hungarian Grand Prix, is set to be sidelined for at least four races, with test driver Luca Badoer now drafted in for the next grand prix in Valencia next week.

But when asked by a reporter if he would consider taking Massa's place if his injuries healed, the 40-year-old gave a downbeat assessment.

"It's probably the toughest moment I have had in my career," he said.

"Although I am a retired racing driver, for the moment I felt back alive and now I have had to cancel all this, so I am not thinking about the future," he added.

Schumacher sat between his doctor Johannes Peil and manager Willi Weber at the gathering in Geneva and announced that it was a "very sad moment" before going on to thank the Ferrari team for their support after he decided to attempt a comeback.

It turned out to be in vain, as injuries he sustained in a motorcycle race in February left Schumacher struggling when he test drove in a 2007 Ferrari at Mugello.

Peil confirmed that a small fracture at the base of Schumacher's skull had caused the problem and led to his decision on Tuesday to call off the comeback.

"I really tried everything to make that temporary comeback possible, however, much to my regret it didn't work out," he told his personal Web site www.michaelschumacher.de.

"I can only repeat that I tried everything that was within my power. All I can do now is to keep my fingers crossed for the whole team for the coming races."

His decision was greeted with dismay by motorsport fans, but former world champion Jackie Stewart told CNN that Formula One would still go from strength to strength without Schumacher.

"I think Formula One will continue to prosper because it is a global sport," said the legendary Scot.

"Michael Schumacher would have made for a spicy second half of the season, but if I were him I would not have a comeback," he added.

"For Ferrari, this is a disaster because Luca Badoer will drive about half a second slower per lap than Kimi Raikkonen," he predicted.

But Schumacher described Badoer as the "perfect choice" to step in for Massa and said the Italian had been training hard for Valencia because of the fitness doubts surrounding him, which first came to light last week after the one-day Mugello test.