Bolt and Gay stay on course for showdown

(CNN) -- Usain Bolt and Tyson Gay stayed on course for their 100 meters showdown at the world athletics championships by coasting through their quarterfinal heats in Berlin on Saturday evening. 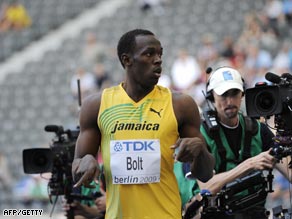 Bolt reacts after coasting to victory in his 100m heat in Berlin Saturday.

Defending champion Gay surged through with a time of 9.98 seconds, again showing fine speed after a sluggish start.

Bolt treated the fifth and final second-round qualifier as little more than a training spin as he made a good start, and was talking to training partner Daniel Bailey of Antigua as the pair crossed the line.

Bailey was given the nod in 10.02 with Bolt clocking 10.03, but the manner of his performance again suggested he will prove tough to beat in the medal round.

"I was happy, I didn't need to do any more work," Bolt told BBC Sport after his imperious qualification.

His Jamaican compatriot Asafa Powell recorded the fastest time of the day as he won the second quarterfinal in 9.95 seconds from lane one, having earlier nearly gone out by easing down too much in his first-round heat.

Britain's Dwain Chambers, back in world championship action after a two-year doping ban, impressed again with a 10.05 clocking to win the opening heat.

Bolt won the ninth of 12 morning heats in 10.20 with Gay claiming the penultimate heat in the fastest time of the session of 10.16.

The American looked untroubled but told reporters after his morning win that he was still suffering from a persistent groin injury which has hampered his preparations.

"I feel okay but my groin felt a little sore," he said.

Gay is defending his 100m and 200m titles, plus the relay crown he won with the United States in the world championships in 2007.

Bolt secured the same triple in Beijing, winning the 100 and 200 in world-record time then taking relay gold with Jamaica.

In a high-profile women's showdown, American Sanya Richards beat Olympic and world champion Christine Ohuruogu in their first-round heat of the 400m, with both qualifying for Sunday's semifinals -- where they will again be running against each other.

Jamaica-born Richards won bronze as her British rival triumphed at the 2008 Beijing Olympics, and watched from the sidelines after contracting a rare virus as Ohuruogu came from nowhere to take the title in 2007.

Richards has set six of the 10 fastest times this year while Ohuruogu has struggled to find her best form.

Masai, who was fourth at Beijing, clocked a time of 30 minutes 51.24 seconds to head off Ethiopian pre-race favourites Meselech Melkamu and Meseret Defar.

Britain's Jessica Ennis led the women's heptathlon after the opening four events, with victories in the 100m hurdles, high jump, 200m and a strong showing in the shot-put giving her a 307-point advantage over Olympic champion Nataliya Dobrynska of Ukraine in second.

On Sunday they will tackle the long jump, javelin and the 800m.

Earlier, Russia's Olympic champion Valeriy Borchin claimed the first gold medal of the championships as he came from behind to win the 20-kilometer walk from China's second-placed Hao Wang of China and Mexico's Eder Sanchez.