(CNN) -- Record-holder Paula Radcliffe stepped up her bid to run in the marathon at the world athletics championships next Sunday with victory on her competitive return to action. 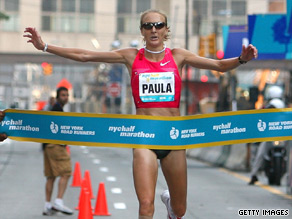 Marathon record-holder Paula Radcliffe is seeking to win back her world title in Berlin.

The British runner, who is hoping to win back the title she won the last time she competed at the event in Helsinki in 2005, triumphed in the New York City half-marathon for the third time on Sunday morning.

It was the 35-year-old's first race since winning the full marathon in the same city nine months ago, having since been sidelined by a foot operation.

She was due to fly to Germany following the race to discuss her fitness with UK Athletics head coach Charles van Commenee and make a decision about whether she will race in Berlin.

"I don't know. I came through the race and that was the main objective and everything felt good. We will see how I recover over the next few days," she told reporters.

"It is definitely more likely than it was this time last week. It's good to get out and race and feel good in the race. It's definitely done me good, now I just have to decide if I have the strength and (training) background behind me to race with the people in the race next week."

Radcliffe missed the 2007 world championships after falling pregnant with her first child, and then suffering back problems.

She battled to be fit for the Beijing Olympics after breaking her leg, but could finish only 23rd as she suffered from cramp.

However, New York has once again proved to be one of her favorite race venues, and she won the half-marathon easily in a time of one hour, nine minutes and 45 seconds - just two seconds outside the record set in its inaugural staging in 2006 by Catherine Ndereba of Kenya.

Radcliffe broke clear of Mamitu Daska just before the eight-mile mark, with the Ethiopian finishing the 13.1-mile event in second place and Ndereba third.

"I normally want to run as hard as I can but today was more about blowing away the cobwebs so it was not the fastest time I have ever run," Radcliffe said.

"It's hard to get into a race knowing you are deliberately conserving something for next week. I felt pretty good in Central Park and tried to keep relaxed. I felt the humidity a bit and the headwind in the last four or five miles.

"I would have been happier to run a minute or so quicker but I felt pretty good afterwards."

The 24-year-old followed up compatriot Valeriy Borchin's victory in the men's race on Saturday to mean that Russian women have won the event for the past five championships.