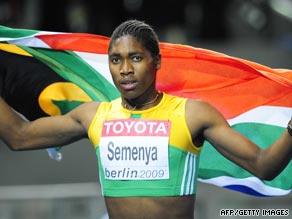 Semenya celebrates her gold, which came just hours after the IAAF called for a gender test on the athlete.

Semenya crushed her rivals by streaking away to secure victory in a time of one minute 55.45 seconds -- the best time in the world this year.

However, the race was run amid controversy following the announcement by the International Amateur Athletics Federation (IAAF).

"In the case of this athlete, following her breakthrough in the African junior championships, the rumors, the gossip were starting to build-up," Davies added to reporters.

There have been precedents in such cases, the most famous being that of Polish athletics great Stella Walsh, who won Olympic gold in the 100 yards at the 1932 Olympics and silver in the same event in the 1936 Olympics in Berlin.

However, after she was shot dead during an armed robbery in 1980, the subsequent autopsy revealed she possessed male genitalia, although she also had female characteristics as well.

Kamel, who until 2003 competed for Kenya as Gregory Konchellah and is the son of former two-time world 800m champion Billy, won in a time of three minutes 35.93 seconds.

""It's amazing to win a world title just like my father. The only thing left for me to do is to beat his times and win more medals and get to the front of my family," Kamel told reporters.

Olympic silver medallist Asbel Kiprop of Kenya could only finish fourth after leaving himself too much to do down the home straight.

Elsewhere, sprint king Usain Bolt produced an effortless run to coast into the men's 200m final and remain on course to claim a world sprint double to add to his Olympic sprint double from Beijing.

The 22-year-old Jamaican, who set a new world record of 9.58 seconds in winning the 100m on Sunday eased home to win his semifinal in 20.08 seconds and only injury looks like depriving him of gold.

"I just try and get through and make it as easy as possible," Bolt told reporters. "I've been training for this for a long time now. I know what I have to do."

There was more sprint joy for Jamaica when Bolt's compatriot Brigitte Foster-Hylton ran a season's best time of 12.51 seconds to finally claim gold in the women's 100m hurdles.

The 34-year-old, who won world bronze in Helsinki in 2005 and silver in Paris in 2003, secured her first global title by edging out Canada's Olympic bronze medallist Priscilla Lopes-Schliep.

However, the biggest cheer of the night at an electric Olympic Stadium was reserved for Germany's Robert Harting, who dramatically won the men's discus gold with his sixth and final throw of 69.43 meters.

The victory was host nations Germany's second of the championships after Steffi Nerius claimed gold in the women's javelin on Tuesday.