(CNN) -- World rugby champions South Africa condemned Australia to a sixth consecutive Tri-Nations defeat to close on this year's title with a 32-25 victory in Perth on Saturday. 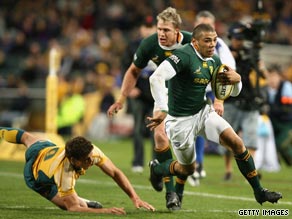 The Springboks have now won five in a row in the annual tournament, which also includes New Zealand, after running in four tries at the Subiaco Oval.

The visitors had scored just four tries in their last four Tests, but went over the line twice in the opening 10 minutes through scrumhalf Fourie du Preez and outside center Jaque Fourie.

Winger Bryan Habana also scored a try in each half, while Morne Steyn kicked 12 points.

Matt Giteau scored 20 points for Australia, crossing for two of their three tries and converting two of them plus a brace of penalties from four attempts.

The victory left South Africa with four wins from four this year, eight points ahead of the All Blacks with two matches to play.

Australia have the chance to stop the South Africans securing the title in Brisbane next Saturday night, then the Springboks play New Zealand in Hamilton the following weekend.

Robbie Deans' team paid the price for an undisciplined first-half performance in Perth, with the visitors leading 22-6 at the break as Giteau kicked a penalty on the halftime buzzer.

Du Preez broke through three tackles to score the opening try after the home side conceded an early penalty, and Fourie strolled over the line unopposed to make it 12-0.

Habana then pounced as winger Lachlan Turner fumbled a high ball following pressure from Jean de Villiers, but Giteau reduced the deficit to nine points when he barged over the line for a try two minutes after the interval.

Du Preez set Habana free for his second try, which Steyn converted for 29-13.

Australia scored consolation tries through Giteau and Turner in the last five minutes, but it was not enough to lift the pressure on coach Deans.