(CNN) -- Australia stopped their Tri-Nations rugby rot with a convincing 21-6 victory over world champions South Africa in an entertaining clash in Brisbane. 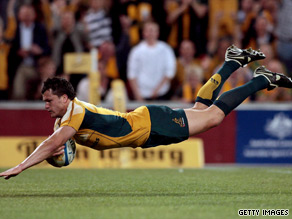 Adam Ashley-Cooper goes over for Australia's opening try in their victory over South Africa.

Having led by three points at the break, Robbie Deans' men finally found a way to close the deal with tries by Adam Ashley-Cooper and James O'Connor sealing a morale-boosting triumph.

The Wallabies' win, their first in five attempts, leaves the Springboks needing to secure two bonus points against New Zealand in Hamilton next Saturday to lock up their first Tri-Nations series since 2004.

Matt Giteau slotted a penalty to grab an early 3-0 advantage for the hosts -- and Giteau's 27th-minute penalty was cancelled out by Morne Steyn's drop goal two minutes later.

Australia edged further ahead when Giteau slotted a drop goal five minutes from the break before Steyn landed his first penalty to trim the hosts' lead to 9-6 at the interval.

The second-half breakthrough came in the 63rd minute when Berrick Barnes sent Ashley-Cooper over untouched with Giteau adding the extras from in front for a 16-6 lead.

Giteau missed the chance to edge further ahead with a missed penalty attempt 13 minutes from time, before O'Connor put the contest beyond doubt with a late try off a Springboks' error, to seal a well-earned victory.