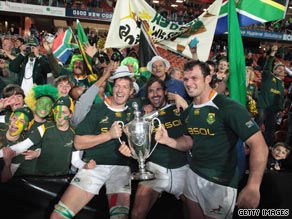 The Springboks had to overcome an early setback at the Waikato Stadium in Hamilton as Dan Carter kicked the All Blacks in front after South Africa were penalized in gathering the kick-off.

But Francois Steyn stepped up to plate for South Africa and he kicked over penalties from 60 and 58 meters to give the Springboks an advantage they would retain for the remainder of the game.

South Africa stretched their lead when winger Bryan Habana barged opposite number Joe Rokocoko out of the way going for a high ball, and Fourie du Preez was on hand to run over the try.

Morne Steyn, who took the closer kicks, landed the conversion and Peter de Villiers' side were firmly in command at 16-6.

Additional penalties from Carter and both Steyns completed the first-half scoring with the All Blacks guilty of missing at least two try-scoring chances when star flyhalf Carter and then center Stephen Donald surrendered possession attempting to kick through the posts.

Indeed it was Carter who made a crucial error as South Africa raced into a 29-12 lead when his attempted pass to Isaia Toeava was collected by Jean de Villiers, who sprinted away to score unopposed and Morne Steyn was able to convert.

The All Blacks rallied as winger Sitiveni Sivivatu ran over for their first try and Carter successfully kicked the conversion and a penalty to cut the margin to seven points, but Morne Steyn kept the Springboks ahead with a second penalty.

Captain Richie McCaw was able to touch down for New Zealand in the dying stages but the scoreline flattered the All Blacks, who were largely outplayed in the match.

The win gave the Springboks their third Tri-Nations title and also saw them record three consecutive Test victories over the defending champions for the first time since 1976.

It also meant that the final match of the tournament between bottom side Australia and their trans-Tasman rivals New Zealand next weekend in Wellington will be largely played for pride.