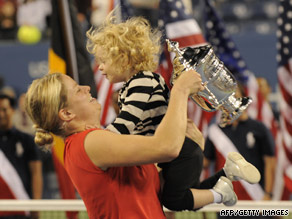 The win capped a stunning run for Clijsters, who emerged only last month from a two-year retirement, during which she got married and had a child.

The 26-year-old becomes the first mother to win a Grand Slam since 1980 when Evonne Goolagong Cawley won Wimbledon.

In a match that lasted an hour and 33 minutes, Clijsters took the first set that saw her take a 2-0 lead before Wozniacki, in her first grand slam final, took the next four games to go 4-2.

The two evened at 4-4, Wozniacki clawing back from a 0-40 deficit to win the next game, only to lose the next three and the set to Clijsters.

Clijsters' breakthrough in the second set came after breaking Wozniacki to lead 4-2 and take the next game.

Although Wozniacki would win one more game on serve, Clijsters would serve for the win, and with the smash of a lob over the net, her triumphant comeback was complete.

Clijsters, who won the U.S. Open in 2005, secured her place in the final after beating third seed American Venus Williams in the fourth round, 18th seed Li Na of China in the quarterfinals and defending champion Serena Williams in the semifinals.

Watch Clijsters discuss her return early on in the U.S. Open »

That 6-4 7-5 semifinal win was not without controversy, as Williams lost the match after receiving a point penalty on match point for verbally abusing a line judge over a foot-fault call.

On Sunday, the U.S. Open imposed a $10,500 fine on Williams -- a maximum on-site fine of $10,000 for unsportsmanlike conduct for her behavior with the judge and $500 for racket abuse during the first set of the same match.

An investigation has begun into whether Williams' behavior warrants consideration as a major offense, for which additional penalties, including suspension, could be imposed.

Williams and sister Venus, as fourth seeds, will face top seeds and defending champions Cara Black of Zimbabwe and Liezel Huber of the United States in the women's doubles finals on Monday.