(CNN) -- Maria Sharapova landed the Toray Pan Pacific Open title in Tokyo on Saturday as her final opponent Jelena Jankovic was forced to retire injured in the first set. 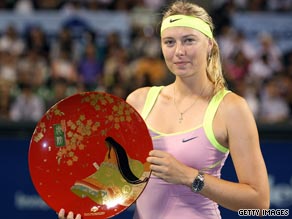 Sharapova was winning her first title of 2009 after returning from injury.

Unseeded Russian Sharapova was leading 5-2 when Jankovic pulled out with a right wrist injury.

It is Sharapova's first title since returning to the WTA after being sidelined for 10 months after shoulder surgery.

Serbian Jankovic claimed the opening two games, but Sharapova stormed back to claim the next five before the seventh seed signaled she could not continue.

"It was a tough start today. Jelena started off so strong," admitted tennis icon Sharapova.

"It was my second final of the year and I was a bit nervous.

"But I played well enough this week to know I could give her a good match. I just wanted to keep fighting out there and unfortunately Jelena had to stop," the 22-year-old added.

Sharapova has taken advantage of a series of shocks in the $2 million tournament which saw world number one Dinara Safina and Venus Williams exit in the first round.

Venus Williams was back in action in her opening round match at the China Open in Beijing on Saturday, but was made to fight hard by Russia's Vera Dushevina before coming through 6-2 7-6.

The seven-time grand slam winner trailed 4-0 in the second set before claiming the next five games.

Dushevina hit back to force a tiebreak which Williams claimed comfortably to reach the second round.

The tournament is being held in conjunction with an ATP men's event with Rafael Nadal, Novak Djokovic and Andy Roddick in action when it gets underway on Monday.

Sunday will see top seed Safina and second-ranked Serena Williams in action in the women's tournament with Sharapova granted a first round bye after her Tokyo heroics.