(CNN) -- Tiger Woods made it a perfect five wins from five matches as he crushed Y.E.Yang 6 and 5 to clinch the Presidents Cup for the United States in the concluding singles against the Internationals on Sunday. 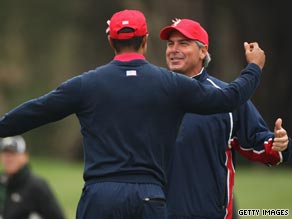 The world number one has proved invincible all week at Harding Park in San Francisco and gained a measure of revenge on South Korean Yang, who denied him the title in the final round of this year's PGA Championship.

The home side had gone into the final 12 singles matches with a three-point lead after another strong showing in fourballs and foursomes play on Saturday, with Woods and partner Steve Stricker winning both their matches for the second straight day.

Woods joined his friend Mark O'Meara and Japan's Shigeki Maruyama as the only players in the history of the Presidents Cup to boast perfect records during a match.

He was behind early against Yang, but rolled home a string of birdie putts against a man who shocked the golfing world by coming from two shots behind Woods in the final round to claim his first major.

"He got me there, and I figured I could get him here," Woods told NBC Sports.

"It certainly was not exactly the same atmosphere, but then it still was an important point."

Fred Couples' men always looked set to clinch the trophy after British Open champion Stewart Cink gave them a winning 4 and 3 start against Adam Scott in the first match of the day.

Woods then closed out the victory with their fifth point of the day before Geoff Ogilvy gained a measure of respectability for the Internationals by wrecking Stricker's perfect record with a 2 and 1 win for Greg Norman's team.

Tim Clark also shone for the visitors with an emphatic eight-birdie 4 and 3 win over Zach Johnson.

But Phil Mickelson rounded off a dominant performance by the Americans in the final match on course as he dispatched Retief Goosen 2 and 1 with a birdie on the 17th.

It was the fourth win of the week for Mickelson who is finishing the year strongly after a season disrupted by revelations that both his wife and mother are battling breast cancer.