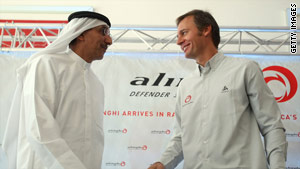 Alinghi hoped to defend the America's Cup in the gulf state of Ras al-Khamah.
STORY HIGHLIGHTS

(CNN) -- America's Cup champions Alinghi reacted furiously on Tuesday to a decision by the Supreme Court in New York that it cannot defend sailing's most prestigious crown in the United Arab Emirates.

The Swiss syndicate announced earlier this year that it had selected the small Gulf emirate of Ras al-Khamah in the UAE to face off against U.S. challenger Oracle next February.

But in an increasingly bitter legal battle, the Oracle team, headed by billionaire software tycoon Larry Ellison, filed a lawsuit over the choice of venue.

It argued the proximity to Iran made it unsafe and crucially it was a violation of the America's Cup rules which state that say that the competition cannot be held in the northern hemisphere between November 1 and May 1.

Justice Shirley Kornreich based her decision on that stipulation in the "Deed of Gift", the 19th century rules that govern the oldest competition in international sport.

Alinghi swiftly made its feelings known on its official Web site www.alinghi.com with a strongly-worded statement.

"This is a disappointing result as we were certain that Justice Cahn's May 2008 decision allowed the Defender to chose Valencia or any other location'," the Swiss team's lead counsel, Lucien Masmejan said.

"Ras Al Khaimah has put enormous time and effort into this 33rd America's Cup project. We thank them and feel sorry for this unexpected result out of the New York court," he added.

Since Alinghi retained the America's Cup in Valencia in 2007, there have been a series of court battles over the rules for the next competition with rival syndicates to Alinghi, led by Oracle, claiming it was gaining an unfair advantage.

Wrangling appeared at an end when Oracle emerged as the official challenger for a best-of- three series contested giant multihull yachts.

"BMW Oracle should clean up their unsportsmanlike behavior with a dose of saltwater and sunshine and challenge for the Cup on the water. Otherwise they should stand aside and let other teams compete," he said.

The court ruling is likely to mean the America's Cup will now return to Valencia.