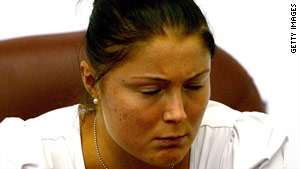 Safina is set to be sidelined for weeks with a serious back injury.
STORY HIGHLIGHTS

(CNN) -- A tearful Dinara Safina was forced out of the WTA Championships with a serious back injury and will lose her world number one ranking to Serena Williams.

The Russian was tied 1-1 in the first set of her opening round-robin encounter against Serbian Jelena Jankovic when she retired.

Safina, the sister of former men's world number one Marat Safin, was forced to quit because she was unable to serve.

It was later revealed that she had been struggling with the back injury for three months and had been taking cortisone injections.

Safina said she will be sidelined for at least six weeks and is struggling to compete in the opening grand slam of 2010 in Australia.

"My body just gave up. I did everything possible to play. I went to have a cortisone injection, but I couldn't handle the pain anymore," Safina told reporters.

American Williams had lost the top ranking to Safina last week, but the margin was so close that whoever had the better record in Doha would end the year as world number one.

Second seed Williams beat Svetlana Kuznetsova in straight sets in her opener on Tuesday so she will take the honor whatever happens later in the tournament.

She later celebrated her elevation to top spot by beating sister Venus in the second match for both in the Maroon Group.

Victory in a scrappy match by 5-7 6-4 7-6 came after two hours 41 minutes and was a second defeat for defending champion Venus who will almost certainly exit the tournament.

Serena saved a match point in the decider and reserved her best play for the tiebreaker, setting up mathpoint with a blistering backhand and settling it with an ace. The win clinches her semifinal place.

"It's a great feeling to be world number one, but I feel really sorry for Dinara. She's a great player and never gives up," Serena said after her victory.

My body just gave up. I did everything possible to play. I went to have a cortisone injection, but I couldn't handle the pain anymore
--Dinara Safina

Safina will be replaced in the season-ending event by Vera Zvonareva of Russia while her misfortune boosts the hopes of former world number one Jankovic who will be awarded a straight sets victory after Safina's withdrawal.

Jankovic lost her White Group opener to Viktoria Azarenka of the Belarus on Tuesday, but sixth seed Azarenka herself suffered a setback in her second match.

She lost to Caroline Wozniacki of Denmark in a near three-hour marathon clash between two players making their debuts in the prestigious Tour finale.

The top two players from each group go forward to contest the finals at the $4.5 million tournament in Qatar which boasts a $1.5 million check to the winner.