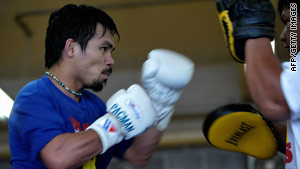 (CNN) -- Manny Pacquiao is fully focused on next month's fight with Miguel Cotto in Las Vegas despite the typhoon which has devastated parts of his native Philippines, insists his trainer.

The 30-year-old took time out from his preparations to visit some of the worst-hit areas around the capital Manila and distributed food and supplies.

More than 700 people died and six million were left homeless while the IBO light welterweight champion, considered by many to be the best pound-for-pound fighter in the world and dubbed 'Pacman' by his fans, was at home training.

He has now returned to his base in Los Angeles ahead of his November 14 showdown with WBO welterweight champion Cotto at the MGM Grand, and his trainer Freddie Roach believes he is ready to face the Puerto Rican.

"It left him mentally drained and very sad, naturally," Roach said of the Manila visit, during a conference call from Los Angeles on Wednesday.

"But once we got in the gym, he put it aside. Manny is able to put that side of real life aside when he gets into the gym.

"I feel Manny, the way he's punching right now, with the power that's there at this weight, he's going to knock Cotto out. I'm very confident and I look forward to the win."

Pacquiao, who crushed England's Ricky Hatton on May 2, has had a high-profile going into the fight, with cable channel HBO shooting a 24/7 reality show around the buildup.

It featured scenes of a worried Roach pleading with his fighter to move their training camp from Baguio as another typhoon was forecast to land.

"I was concerned for the safety of the sparring partners, Manny's crew, Manny and myself and very concerned the typhoon was going to come quicker than it did," Roach said.

"Manny was more relaxed about it and so I said, 'Manny, I'll be waiting for you in Manila.' I was just trying to get him motivated to go and then that night at midnight he got motivated, he called me up and said, 'Let's go.' So we left at midnight and went back to Manila."

It left him mentally drained and very sad, naturally. But once we got in the gym, he put it aside.
--Trainer Freddie Roach

The capital, however, proved even more distracting as Pacquiao, who is involved with local politics, was sought by local officials for meetings.

"The last week in Manila was a little bit difficult because we had so many politicians there, trying to make meetings with Manny and everybody was trying to pull him in every direction they could," Roach said.

"So Manila wasn't that great for us. He was distracted in Manila and our last day of boxing there I was really disappointed, he didn't do that well. His mind was just somewhere else.

"Then we got to LA and he boxed yesterday. We still had a bit of jet lag and I didn't really expect a great day from Manny, he looked a little tired in his eyes, but he gave me 10 great rounds. He's back on track and he's very close to being ready for the fight."