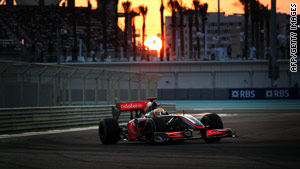 Lewis Hamilton will be looking to end a disappointing 2009 season on a high note in Abu Dhabi.
STORY HIGHLIGHTS
RELATED TOPICS

Hamilton will be looking to end a disappointing year for McLaren with victory in the season finale at the new Yas Marina circuit, but even with a win can do no better than hold onto his fifth overall placing in F1's first day-night event.

The 24-year-old will start a race from the front of the grid for the 17th time in his career, and the fourth in the last seven races, after setting the fastest time in all three sessions.

He clocked a best lap of one minute 40.948 seconds as the sun set on Saturday evening to head off the Red Bull duo of Sebastian Vettel and Mark Webber.

Vettel, whose bid to prevent Button clinching the world title ended last time out in Brazil, timed 1:41.615 while Webber recorded 1:41.726.

"The car is the best it has been all year. It was a smooth lap, and it just kept getting better and better," Hamilton told reporters.

"The place is just stunning. They all said it would be a great event, but it's mind-blowing. It's a great place to come to, a great country. The weather has been great and the people are so respectful and so welcoming. I hope we can put on a great show tomorrow."

Button's bid to ensure the first all-British front row since 1995 came to nothing as he was out-qualified by teammate Rubens Barrichello for the 10th time this season.

Behind the scenes at Yas Marina

The Brazilian is expected to be making his final race outing for world champions Brawn, who are expected to sign Nico Rosberg from Williams.

The German, who announced during the week that he will be leaving the British team, qualified ninth as Toyota's Jarno Trulli and BMW Sauber duo Robert Kubica and Nick Heidfeld took sixth, seventh and eighth places.

Kimi Raikkonen, who will be making his final race appearance for Ferrari, finished outside the top-10 for only the third time this season, and will start in 11th behind Toro Rosso's Sebastien Buemi.

The place is just stunning. They all said it would be a great event, but it's mind-blowing.
--Lewis Hamilton

Heikki Kovalainen's chances of keeping his drive with McLaren took a blow as he finished 15th after suffering gearbox problems.

The Finn, fastest in Friday's practice sessions, was just ahead of two-time world champion Fernando Alonso, who along with Renault teammate Romain Grosjean failed to make it beyond the opening 20-minute session.

Alonso, at least, can look forward to joining Ferrari as Raikkonen's replacement, but Frenchman Grosjean faces an uncertain future as he has failed to take his chance since taking over from the sacked Nelson Piquet Jr.

Former world champions Ferrari will prop up the grid as veteran Giancarlo Fisichella again struggled ahead of what could be the final race of his career as he will be the team's reserve driver next year when the injured Felipe Massa returns.