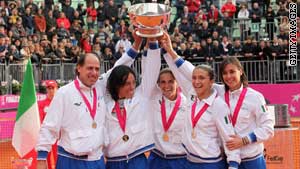 With a 2-0 lead overnight, world No. 11 Flavia Pennetta's 7-5 6-2 victory over Melanie Oudin in Sunday's opening singles match gave the Italians an unassailable lead.

It followed comfortable wins for Penetta and Francesca Schiavone on Saturday.

The fourth singles rubber was subsequently scrapped, with Sarah Errani and Roberta Vinci winning 4-6 6-4 11-9 against Vania King and Liezel Huber in the remaining doubles contest.

"It is a very nice feeling," Pennetta said. "We worked hard to get to this point and finally we make it.

"In the beginning of the week everyone expects so many things, and we were very nervous. But now we can enjoy."

The absence of the Williams sisters Serena and Venus proved crucial for the U.S., with Italy's greater experience proving the difference on the clay as they added a second Fed Cup to their previous victory in 2006.

Oudin, 18, has enjoyed a breakthrough year in the sport but was disappointed afterwards.

"I think I could have played better on some points," she said.

"In the first set it was so close, and I had a lot of chances, so I feel like if a couple things had gone my way or if I had hit this shot on that point, then it would have changed the momentum in the match."