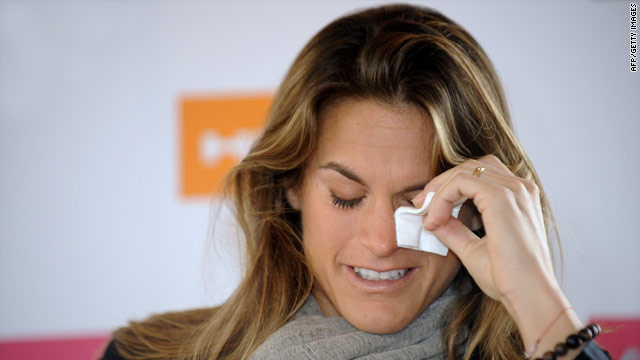 A tearful Amelie Mauresmo explained to reporters in Paris why she was ending her career.
STORY HIGHLIGHTS
RELATED TOPICS

(CNN) -- Former world No. 1 Amelie Mauresmo has announced her retirement from tennis, revealing that she no longer has the desire to play and train.

The 30-year-old won two Grand Slam tournaments in 2006 as she spent 34 weeks at the top of the rankings, but has suffered a gradual slide since following a series of injuries and ended this year at No. 21.

The Frenchwoman won the Paris Indoor Open earlier this year, but it proved to be a false dawn in her return to top form and she skipped the final two tournaments of 2009.

"I came here to announce the end of my career. I made this decision after careful consideration," she told reporters at an emotional press conference on Thursday.

"I don't want to train anymore. I had to make a decision, which became evident in the last few months and weeks. When you grow older, it's more difficult to stay at the top.

"It's a bit sad, but this is the right decision. I was lucky enough to have an exceptional career and to experience very strong feelings on the court.

"I dreamt of this career, I dreamt of winning a Grand Slam title. I lifted trophies in every city in the world and I lived 10 magical and unbelievable years."

Mauresmo claimed her first major win at the Australian Open when Justine Henin pulled out with injury during the final, but she defied her doubters by beating the Belgian to claim the Wimbledon title later that year.

I don't want to train anymore. I had to make a decision, which became evident in the last few months
--Amelie Mauresmo

Henin and her compatriot have both ended their relatively brief retirements this year, but Mauresmo said she was unlikely to have a similar change of mind.

"Even if I've learned to never say never, the players you are thinking about stopped earlier than me before coming back," she said.

"Amelie's accomplishments not only include winning two Grand Slam titles and becoming the first French player to reach the world No. 1 ranking, but leading France to a Fed Cup victory, and generously donating her time to various social causes," she said.

"Amelie is an extraordinary player, one of the nicest and friendliest personalities on tour, and a true champion both in tennis and in life."

Mauresmo won the junior French Open and Wimbledon titles in 1996 before heading to the senior circuit, where she reached the Australian Open final in 1999 before losing to Martina Hingis.

She became the first French player, male or female, to reach the top of the rankings in 2004, when she won the silver medal at the Athens Olympics, losing to Henin in the final.

But her career came off the rails in 2007, missing two months due to injury and finishing outside the top-10 for the first time in seven seasons.

The following year was even worse as she ended it outside the top-20. Mauresmo won 25 titles overall, and was a losing finalist 23 times.