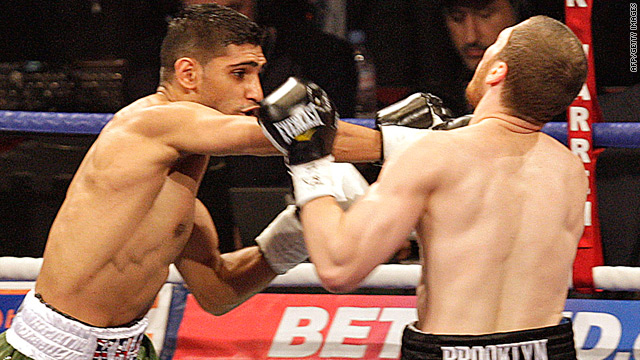 (CNN) -- British boxer Amir Khan has retained his WBA light-welterweight title after winning the much-hyped "battle of the faiths" by stopping challenger Dmitriy Salita in the first round on Saturday night.

Khan, a devout Muslim, knocked down his Jewish opponent three times before the referee stopped after just one minute and 16 seconds.

Salita, an American citizen who was born in Ukraine and is nicknamed "Star of David", was unable to follow up his bold claims made in the build-up to the fight, which took place in Newcastle in the north-east of England.

The 22-year-old Khan was successful in his first defense of the belt that he won in defeating Andreas Kotelnik in July.

He is trained by American Freddie Roach, who also guides Filipino star Manny Pacquiao, considered by many to be the best pound-for-pound boxer in the world.

"It was very explosive. The fight was just what we asked for, what Freddie asked me to do. We had too much power for this guy," a delighted Khan told reporters after the fight.

"I'm a growing young man and developing as a man. Freddie said to take it easy, pick the right shots and you'll take this guy out and we did.

"Freddie is a great trainer, he's like a father figure to me and to have him in my corner means a lot. Everyone knows I'm a hard-working fighter and if you put the hard work in you're going to get the benefits.

"After the first shot I could see his legs buckling and I just had to take my time. I knew he was going."

Roach has helped the Olympic silver medal winner to rebuild his career after a humiliating defeat by unknown Colombian Breidis Prescott last year.

"It was a blessing in disguise what happened against Prescott, I got beat and came back stronger," Khan said.

Roach was equally impressed with his young charge.

"I would give him an A+. I said if you hurt him, finish him. We've been working on that power and the fight was really over after that first punch," he said.