By James Montague
For CNN

LONDON, England (CNN) -- From four leaf clovers to a severed rabbit's foot, when it comes to lucky mascots reason and taste often go out of the window. 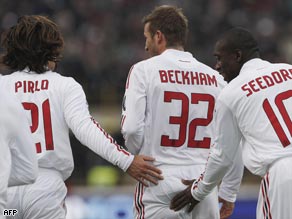 David Beckham's teammates give his bottom a squeeze after scoring his first goal for AC Milan in their 4-1 defeat of Bologna.

No more so than at AC Milan where one charm is being held responsible for the team's recent upturn in fortunes on the pitch: David Beckham's bottom.

Since Beckham's arrival at the San Siro, the England midfielder has started every game and scored his first goal in last weekend's demolition of Bologna.

But as he walked away after celebrating the goal, Clarence Seedorf and Andrea Pirlo both stroked his left bum cheek.

This was apparently because they believe Beckham's posterior has as much to do with Milan's revival as his sweet right foot.

"Now the players are doing the same thing with Becks' bottom. He is seen as lucky."

Have your say: what are the strangest footballing superstitions that you have seen?

One English newspaper has even taken to calling him "Goldenbuns", a play on "Goldenballs", the pet name his wife Victoria uses and for which he is still good naturedly mocked when it emerged in the press.

Football has a long history of superstitions. Below are some of the strangest rituals:

Kissing Fabien Barthez's head
Barthez's big shiny pate became something of a totem for the French during the 1998 World Cup.

The ritual was always the same. Veteran defender Laurent Blanc would approach his eccentric goalkeeper before planting a kiss on the top of his head. The team insisted that Blanc maintained the tradition as Les Bleus reached the finals. The French ended up beating Brazil 3-0.

Beanie the Horse watches the action
With his blond hair, steely grimace and piercing stare, Stuart Pearce was known on the pitch for his hard tackling, no-nonsense ways.

Off it he's, well, a bit of a softy. Whilst in charge of Manchester City the former England defender started bringing a rather bizarre charm, placing it near the dug out so it could observe the action: Beanie, a cuddly woolen horse.

It didn't do him much good. He was fired later that season.

Blessing from a juju man
"Juju" men used to be a regular fixture at African football matches. These self-appointed holy men would bless or curse teams for money.

Even government ministers were seduced by them. When the Ivory Coast won the African Cup of Nations in 1992, the government claimed it was because the sports minister paid a "juju" man to bless the team.

But he angered them by refusing to pay up. The result? A hex that saw the team endure a miserable ten year losing streak.

Tired of defeat, the government begged the juju men for forgiveness, coughing up the $2000. Ivory Coast promptly qualified for the 2006 World Cup.

Invoking the power of the Virgin Mary
Take a look at Newcastle United's goalkeeper Shay Given before a match. If you look carefully you'll notice him dropping a bottle into the back of the goal.

No, not a bottle full of Gatorade but rather a small vial of Holy Water from Lourdes, France.

It was there that it is claimed the Virgin Mary appeared in 1858. It has since become a place of pilgrimage for the sick, drawn to the allegedly healing waters.
"I carry it in my kit bag and it goes everywhere with me," Given said back in 2002. At the time of writing, Given is still injury free.

If all else fails, urinate...
When Barry Fry, then Birmingham City's boss, watched his team lose another game, enough was enough.

For years the club had suffered from dismal form at their St Andrews ground in Birmingham, England, and had not won anything of note for decades.

The reason, fans and club officials feared, was a gypsy curse spat out at the club's owners when they evicted a band of travelers to make way for their new stadium.

Managers had tried and failed to lift the curse -- one even placed crucifixes in the floodlights, but it was Barry Fry who had the most ingenious method. He urinated in each corner of the ground. Birmingham City haven't won anything of note since.

The UK's Guardian newspaper described how Naychapi - a warlock who was described as a "witch doctor-cum-shaman-cum-priest-type-fella" - traveled to Germany before the World Cup to cast spells on all 12 stadiums, not to mention the pitch and the goals, in a bid to turn the gods in Ecuador's favor.

The South American minnows went on to shock both Costa Rica and Poland, qualifying for the second round for the first time in their history before losing to England 1-0.

But then again England had their own magical good luck charm to call upon. David Beckham scored the only goal.