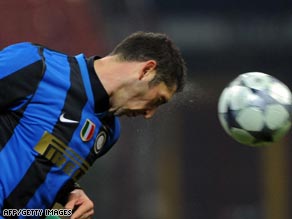 Marco Materazzi heads the ball in a Champions League match in November 2008.

Inter eventually won the title on the last day of the season, when striker Zlatan Ibrahimovic returned to the field in the second half of the game after a prolonged absence because of injury.

The report also highlights the decision to allow Marco Materazzi instead of Julio Cruz to shoot a penalty kick against Siena in the penultimate game of the season (Cruz is the designated player to shoot penalties). Materazzi missed, the game ended 2-2 and Roma closed the gap to just one point with one more game to go.

Here CNN's Rome bureau chief Alessio Vinci, who has obtained a copy of the full report, explains what's in the report, and how strong the evidence against Inter is.

Question: You read the report, what do you make of it?

Vinci: I just obtained and read the full report: it does not include a single shred of evidence that Inter Milan threw away matches to increase gambling odds. Not a wiretap or allegation made by an informant, not even a testimony from a witness, absolutely nothing. In fact the report is old. It was included last year in a wider investigation on alleged links between the former Inter Coach Roberto Mancini and a Mafia associate. That investigation ended without charges or indictments.

Question: When was the report prepared, how does the investigator reach his conclusions?

Vinci: The report was prepared by a single investigator who used the internet as its sole source. The investigator highlights (and criticizes) a series of decisions made by the coach towards the end of the season, such as the late return from injury of a notable champion or who was in charge of kicking penalties, and concludes that such decisions are enough to prove the coach was fixing games.

The report was delivered to prosecutors on May 30, 2008, but clearly didn't contain enough evidence to press charges, since prosecutors failed to indict anyone. That is why perhaps the Italian media today didn't pick up the story. Not even the sports newspapers.

Question: You are a football fan and you watched many of the games last season, do you have a personal opinion on the matter?

Vinci: As a football (and Inter) fan I certainly found it odd (and frustrating) that last year the team didn't win the Championship when it could have (3 games before the end of the season), and indeed some of the coach's decisions appeared odd at the time. There is certainly plenty to talk about over a beer in your favorite pub, but I have not seen or read evidence suggesting the games were fixed.