Mexicans turn to voodoo ahead of crucial U.S. match 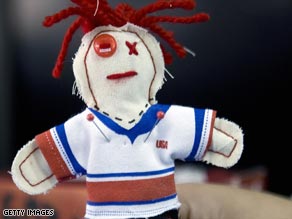 Funny or freaky? Voodoo dolls of U.S. players have been issued in Mexico ahead of a crucial football game.

Both sides will be looking to make a strong start to the final phase of qualifying for South Africa 2010, when they meet in the match at Columbus, Ohio. Mexico haven't won in the U.S. for ten years.

In the hope of boosting their team's chances, Mexican sport magazine 'Record' has issued coupons for U.S. team voodoo dolls -- which could be attained with five different stamps from the publication.

The move has also been supported by U.S. chain Blockbuster, which began trading the coupons for dolls in its Mexican stores last week.

Complete with pins, the dolls represent U.S. players, however, users are instructed to wish for Mexican goals, rather than hoping for harm upon the U.S. players.

The practise of using voodoo dolls stems from the belief they represent the spirit of a person. It's believed that by taking actions upon the doll, the represented person will be affected.

Fans will have to wait until the full-time whistle on Wednesday to see if the dolls have made an impact.

Read about other football superstitions, including David Beckham's "Golden buns" at Football Fanzone.