LONDON, England (CNN) -- English Premier League side Chelsea confirmed Thursday that Guus Hiddink will take charge until the end of the season following the shock dismissal of Luis Felipe Scolari. 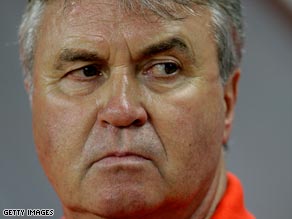 Russia coach Guus Hiddink has agreed to take charge at Stamford Bridge until end of the season.

The veteran Dutchman currently coaches the Russian national team, which he led to the semifinals of last year's European Championship.

Chelsea said it thanked the Russian Football Union for its "understanding and cooperation."

Russia have two World Cup qualifiers between now and the end of the Premier League season -- Azerbaijan at home at the end of March and Liechtenstein away on April 1 -- and Hiddink will be at the helm.

Hiddink has previous experience of managing a club and country at the same time, successfully combining roles at PSV Eindhoven and Australia.

He is expected to arrive in London on Thursday and adopt a watching brief at Chelsea's FA Cup fifth round tie at Watford on Saturday when stand-in Ray Wilkins would take charge.

The west London club's next Premier League outing is on February 21 against Aston Villa who are currently third in the table, one place above Chelsea.

Chelsea then face a last-16 Champions League clash against Juventus who are coached by former Stamford Bridge supremo Claudio Ranieri.

Hiddink is currently in Turkey at a training camp with the Russian national side and says he accepted the dual role out of respect for billionaire Chelsea owner Roman Abramovich.

"Abramovich does so much for Russian football that I wanted to do something back," Hiddink told Dutch radio.

There is already speculation a successful climax to the season could see Chelsea try to tempt him to take a permanent appointment although Hiddink appears committed to leading Russia to the 2010 World Cup finals in South Africa.

International captain Sergey Semak is confident that will still be the case, telling TV station Russia Today: "He's taking extra responsibility on himself, but I don't think it will affect the Russian team."

Scolari went on Monday after a string of indifferent results which have left Chelsea in fourth place in the Premier League, but in the last 16 of the Champions League and fifth round of the FA Cup.

"Unfortunately the results and performances of the team appeared to be deteriorating at a key time in the season," said a statement on the club's official Web site.

"In order to maintain a challenge for the trophies we are still competing for we felt the only option was to make the change now."