(CNN) -- Juventus playmaker Pavel Nedved has announced he will retire at the end of the season. 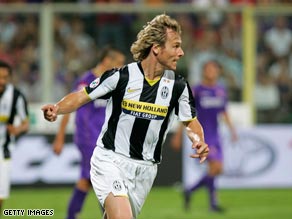 Nedved has spent eight years with Juventus, winning the Serie A title twice with them.

The former Czech Republic international nearly quit before the current campaign but instead opted to sign a new 12-month deal with the Turin club.

But, speaking after the 1-0 Champions League defeat to Chelsea on Wednesday, he told www.uefa.com: I'm still enjoying playing but considering my physical and mental condition I understand that the time has come to make way for younger players -- they deserve to play.

"Maybe you think I'm still young but I'm almost 37. I will quit at the end of the season, no matter how well we do in the Champions League or Serie A.

"The decision is final and I don't think I will change my mind -- I don't need to. It is the right time to quit."

Nedved, who joined Juve from Lazio in 2001, suffered European heartbreak when he was forced to miss the Bianconeri's Champions League final defeat to AC Milan in 2003, the year he was named European footballer of the year, because of suspension.

He did win the UEFA Cup Winners' Cup with Lazio in 1999 and landed the Serie A crown the following year. He has also won two more Scudettos with Juve.