(CNN) -- CSKA Moscow produced a professional performance to get past Aston Villa's 'reserves' in the second leg of their UEFA Cup last-32 tie on Thursday, winning 2-0 on the night for a 3-1 aggregate victory. 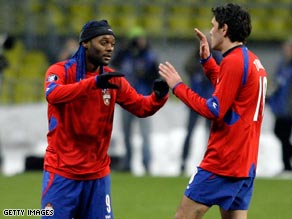 It always looked a tall order for a makeshift Villa side in the wake of eight first-team regulars controversially being left at home by manager Martin O'Neill.

And so it proved on the plastic pitch at CSKA's Luzhniki Stadium, as a strike from Yuri Zhirkov on the hour and Vagner Love's stoppage-time second goal proved enough to put the 2005 winners into the last 16.

Villa's compatriots Tottenham are also out after drawing 1-1 at home to Shakhtar Donetsk for a 3-1 aggregate defeat.

Like O'Neill, Tottenham manager Harry Redknapp rested a host of players ahead of Sunday's Carling Cup final against Manchester United.

And the decision appeared to be working when Giovani dos Santos' stunning strike put the home side ahead -- but Spurs failed to find the goal they needed to force extra-time and Fernandinho grabbed a late goal to seal Shakhtar's place in the last 16.

Manchester City are now the remaining English side left in the competition after a second-half Craig Bellamy double gave them a 2-1 win over FC Copenhagen for a 4-3 aggregate victory.

City's last 16 opponents will be another Danish side Aalborg, who won 3-1 at Deportivo La Coruna to stun the Spanish side 6-1 on aggregate.

Ukranian side Metalist Kharkiv also booked their place in the next round with a comfortable home victory over Sampdoria.

Leading 1-0 from the first leg in Italy, goals from Sergey Valyaev and Jackson Coelho in the first half sealed a 3-0 aggregate victory.

Bundesliga leaders Hamburg cemented their progress with a 1-0 home victory over Dutch side NEC Nijmegen. Ivica Olic scored the only goal in the ninth minute to make absolutely sure of victory following Jamburg's 3-0 victory in the Netherlands last week, where Olic also scored.

Hamburg will face Galatasaray in the next round after the Turkish side claimed a remarkable last-gasp 4-3 victory over Bordeaux, after the first leg in France ended goalless.

Sabri Sarioglu slammed home a last-minute winner just as the Turkish side looked like they were going out on away goals.

Bordeaux scored twice in the space of a minute, through Marouane Chamakh and Fernando Cavenaghi, to draw level at 3-3 with a quarter of an hour left to play to appear set for a last-16 place.

But full-back Sabri smashed a low 20-yard shot into the corner with seconds remaining to settle an amazing end-to-end tie.

Marseille are also in the hat for the next round following a nail-biting victory over FC Twente. The Dutch side had won in France, but Hatem Ben Arfa levelled the aggregate scores in the 24th minute and neither side found a winner, taking the tie into penalties.

It eventally took 16 penalties to settle the tie with Modeste M'Bami converting the winning kick to give Marseille a 7-6 spot-kick win.

A Jerome Rothen strike and two from Peguy Luyindula were enough to see Paris St Germain comfortably through against Bundesliga title challengers Wolfsburg.

Makoto Hasebe pulled one back for the Wolves but it did little to mask the one-sided nature of the tie as a 3-1 win put PSG through 5-1 on aggregate -- ensuring they joined compatriots Marseille in the next round.

Elsewhere, a stunning late solo goal from substitute Leonardo gave Ajax a 1-1 draw at home to Fiorentina to send the Dutch giants through 2-1 on aggregate.

Alberto Gilardino had given Fiorentina the lead with a goal in the 62nd minute, putting the teams level on aggregate after Ajax's 1-0 win in the first leg in Italy.

Artem Kravets scored a double to help Dynamo Kiev draw 2-2 at Valencia and send the Ukrainian side through on the away goals rule after a 3-3 aggregate score.

Also through are defending champions Zenit St Petersburg, who went through after a second straight 2-1 win over Stuttgart