LONDON, England (CNN) -- Deep into injury time in one of Manchester United's most important games of the English Premier League season a 17-year-old Italian on debut hit a stunning winner and lifted himself to instant stardom. 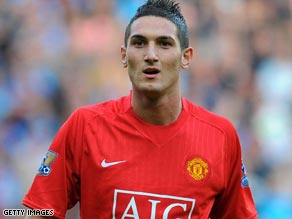 Man of the moment: Seventeen-year-old Federico Macheda is now a legend at Manchester United

Federico Macheda was the teenager who came on as a substitute and scored late on Sunday for the Red Devils -- helping them to a 3-2 win after they had earlier trailed 2-1 to Aston Villa at Old Trafford.

The finish was of the highest quality -- as he curled the ball past Villa goal-keeper Brad Freidel from a wide angle. His fine touch, turn and shot were made all the more amazing given their significance in the context of both the match and season.

But, who is this 17-year-old hero? And how did he get to live his fairytale?

Born in Rome in 1991 (yes, 1991), Macheda, known by team-mates as "Kiko", is a striker who developed his game through the ranks of the Lazio youth programme in Italy -- where he is considered as one of the brightest talents of the future.

He made a move to Manchester United in September 2007, and quickly moved up the ranks -- starting out in the under-18 side, before progressing to the senior reserve team. He officially signed a professional contract with the club on his 17th birthday, in August 2008.

Although Sunday's goal puts his name permanently on the minds of all Manchester United faithful, it's not the first time he has made an impression. Just six days before he scored a thrilling hat-trick for the reserve team in a 3-3 draw against Newcastle at St James' Park.

He has also represented Italy at under 19 level.

What did you think of Macheda's goal? Can he go on to become a top club and international player? Share your thoughts in the Sound Off box below.

Macheda was eventually booked for celebrating with the crowd after his strike -- though he later revealed he had hugged family members -- who were in the crowd to see his debut.

He was named man of the match for his goal (after playing just 30 minutes) and although he wasn't allowed the bottle of wine he won for the honor -- he told Manchester United television "this is the best day of my life."

In the post-match interview on Sky Sports, Macheda said: "I think this is the day of my dreams -- to score a goal like that on my debut."

The Manchester United Supporters' Web site has since been inundated with comments praising Macheda, and there are even several proposed supporters' chants being drafted for their new star.

English-based Italian football journalist Gabriele Marcotti told CNN he had been impressed by Macheda's progress at a young age -- but felt it was important he didn't get ahead of himself.

"When a guy scores like that on debut there's always excitement. But, he needs to keep his feet on the ground and keep working," Marcotti said.

Marcotti said the reaction from Italian fans was likely to be mixed.

While there would be happiness that he is emerging as a great prospect for Italy in future, there is also concern that players like Macheda are moving to England at a young age and the Italian clubs who train them gain very little in compensation, he said.