LONDON, England (CNN) -- It's fair to say David Beckham may be seeing more green off the football pitch than he does on it. 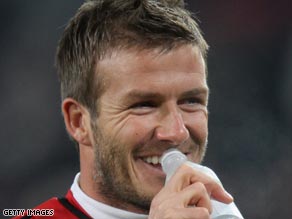 Reason to smile: David Beckham is the highest-earning footballer in the world, according to Forbes

Despite a difficult and expensive period negotiating an extended release from his LA Galaxy club -- Beckham has been named as the world's highest-earning footballer by Forbes magazine.

The magazine has ranked the top 20 top-paid footballers in the world -- a list that includes many of today's top players and some ageing heroes who are still rolling in cash.

The 33-year-old Beckham, currently on loan with Italian club AC Milan as part of an extended deal from LA Galaxy, earned an estimated $46 million last year, according to Forbes. It calculates that the Briton has earned $95m in the past two years -- $66m of which has come from endorsement contracts.

Although his long-running deal with Pepsi ended in December last year, his currently resurgent career is likely to provide a boost for the coming few seasons.

Behind Beckham in the Forbes list is his Brazilian AC Milan team-mate, Ronaldinho, who earned an estimated $33m in 2008. Rounding out the top five places are (respectively); Thierry Henry, Kaka and last year's FIFA World Player of the Year, Cristiano Ronaldo.

See our gallery of the top twenty highest-paid footballers in the world, according to Forbes »

Ronaldo's earnings of $21 million came primarily from his Manchester United wages ($12m), while endorsements from companies such as Nike and Coca-Cola made up the remaining $9m.

The Portugal player's namesake -- Brazilian Ronaldo -- is still on the list at number 12, having earned $15m despite being sidelined for much of the year with a serious knee injury and returning to his homeland to play club football.

Partner in the Sports Business group at Deloitte, Dan Jones, told CNN that only a "tiny percentage" of footballers earned more from product endorsements than they do from their player wages.

"It's only the very, very top. For the vast majority of footballers, the wages they earn from their clubs will be their greatest source of income."

Jones said Beckham's continuing popularity beyond the world of football in both the U.S. and in Europe would likely ensure he remains around the top of the rich list for a few years to come.

"He is now a grand icon that in some sense transcends what he does on the football field," Jones said.

However, Jones added he was impressed with the way Beckham had made strong efforts to reinstate his image as being primarily a footballer over the last 18 months.

What do you think of the top earners? Are there players that deserve to be earning more than these 20? Share your thoughts in the Sound Off box below.