(CNN) -- Didier Drogba muscled his way through for a late winner to put Chelsea into the FA Cup final with a 2-1 victory over Arsenal at Wembley on Saturday. 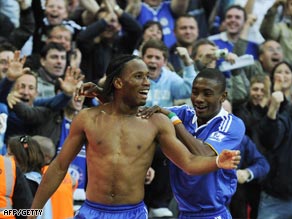 A bare-chested Drogba is congratulated by Salomon Kalou after scoring the winner at Wembley.

The all-London clash rarely hit the heights on a difficult pitch, but Drogba's 84th minute strike gave Guus Hiddink's men a deserved victory and leaves them in contention for three trophies.

Dutchman Hiddink, who took temporary charge of the Blues in February and has lost only one match, said Drogba had proved his worth again.

"He is proving already he is so dangerous, very strong and physically fit," he told Press Association.

"We respect each other very much but also challenge each other without thinking this is a big name."

Arsenal went ahead in the 18th minute as Theo Walcott's volley deflected past Petr Cech, but Florent Malouda equalized for Chelsea just after the half hour mark.

Chelsea looked the stronger against an Arsenal team missing key defenders and goalkeeper Manuel Almunia and it came as no surprise when Ivory Coast star Drogba scored a typical winner.

He latched on to Frank Lampard's hopeful volleyed through ball, shrugged off Mikael Silvestre before rounding Lukasz Fabianksi to roll the ball into an empty net.

Ivory Coast international Drogba scored the winning goal against Manchester United in the 2007 FA Cup final and may get the chance to repeat the trick.

Chelsea, who are a still challenging third in the Premier League and semifinals of the Champions League, showed their character after falling behind to Walcott's strike.

The England international winger connected with a chipped cross from Kieran Gibbs and his effort took a cruel deflection off Ashley Cole's arm to beat Cech.

Arsenal had made a fine start, but without injured central defender William Gallas and with Fabianski showing a lack of authority in goal, Chelsea came back strongly into the game.

Malouda went close with a cross shot which eluded Fabianski, but he was not be denied soon afterwards as picked out by Lampard he cut inside Emmanuel Eboue and beat Fabianski at his near post.

More slack defending from Denilson allowed Nicolas Anelka time to shoot and his shot hit the post with Fabianski beaten.

Walcott looked occasionally dangerous on the flank and twice sent in crosses which might have been converted, but Chelsea looked the more threatening and the teams were spared extra time when Drogba powered through to score.

Arsenal manager Arsene Wenger was left to rue their defensive errors and the performance of his 20-year-old Polish goalkeeper.

"He's a great goalkeeper but it was not his greatest day," Wenger said. "Inexperience, yes. It was a game when any mistake could be costly."