(CNN) -- Manchester United's quintuple bid ended with defeat by Everton in a penalty shootout at Wembley in their FA Cup semifinal on Sunday. 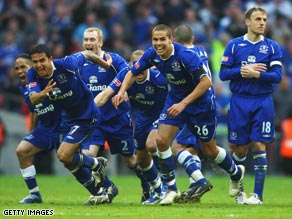 The match finished goalless after normal and extra time and United took an early advantage in the shootout as Australian international Tim Cahill blazed over.

But weak efforts by Dimitar Berbatov and Rio Ferdinand were saved by former United goalkeeper Tim Howard and it was left to Phil Jagielka to hammer home the decisive spot kick.

Everton will play Chelsea, who beat Arsenal 2-1 in the first semifinal on Saturday, in the Wembley showpiece on May 30.

United, who fielded a team heavily loaded with reserves and missing Wayne Rooney, Cristiano Ronaldo and Ryan Giggs, were marginally the better team in normal time and had strong appeals for a penalty turned down when Danny Welbeck appeared to be tripped by Jagielka.

United manager Alex Ferguson leapt to his feet in frustration when referee Mike Riley waved away the appeals, but Everton improved in added time and Cahill brought a fine save from Ben Foster.

Everton manager David Moyes admitted his team had been fortunate not to concede a penalty and said they had been tested by their understrength opponents.

"It was a tough match. If they had put out their under 14s it would have been a tough game, but I thought we kept at it," he told ITV Sport.

United, who have already won the Club World Championship and English League Cup, are leading the Premier League and into the semifinals of the Champions League where they will play Arsenal, but defeat ends their hopes of a clean sweep of major club trophies this season.