LONDON, England (CNN) -- This week's Champions League semi-finals are poised to offer a feast of the world's best strikers. 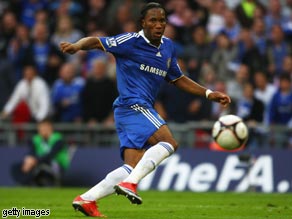 Didier Drogba: Is he good enough to be called the best striker in the world?

The game's best finishers will face off against each other in the ties involving Manchester United, Arsenal, Chelsea and Barcelona. But of all the strikers who is best?

The storming return to form for Chelsea's Didier Drogba has certainly pushed his case as the best in the game.

The Ivory Coast forward, who had a forgettable first half of the 2008/2009 season, has relished the arrival of Guus Hiddink as temporary manager. He has since proved too good for some of the best sides in Europe.

See our list of the top strikers in the world »

Who do you think is the best striker in the world? Tell what you think of our picks and who should be number one.

Eto'o makes a compelling case for himself as the best in the business this season. Having scored 27 league goals to be La Liga's top scorer, the Cameroon striker is in great form and pushing Barca towards the league title.

And what about the glittering array of talent at the disposal of Manchester United and Arsenal?

Wayne Rooney will once again be crucial to United if they are to retain their European crown. The England striker has been a huge threat this season for both club and country, whether deployed as a striker or pushed out wide.

Rooney is ably supported by none other than world player of the year Ronaldo, the club's top scorer, even though he's not really a striker.

Arsenal may be out of the running for England's domestic title, but Emmanuel Adebayor and the injured Robin van Persie have fired the Gunners into the last four in Europe's premier club competition. Indeed Adebayor's stunning equalizer against Villarreal in Spain is a contender for goal of the season.

Outside of this week's matches in Europe there are still some players who are worthy of consideration.

Liverpool's Fernando Torres is undoubtedly one of the best in the game, while it's also tough to look past the likes of Zlatan Ibrahimovic -- who has helped Jose Mourinho's Inter Milan top Italy's Serie A for much of the season.