(CNN) -- German champions Bayern Munich have sacked coach Jurgen Klinsmann and appointed the experienced Jupp Heynckes as his replacement for the final five games of the Bundesliga season. 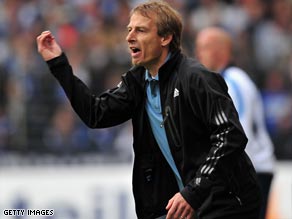 Klinsmann's fate was sealed after Bayern Munich's 1-0 home defeat by Schalke on Saturday.

The 44-year-old took charge of Bayern last July, after leading an unfancied Germany side to the 2006 World Cup semifinals on home soil.

However, despite taking the club to the quarterfinals of the Champions League, he has been dismissed after Saturday's 1-0 defeat at home to Schalke left the club three points adrift of league leaders Wolfsburg.

Saturday's defeat, following the 5-1 Champions League aggregate reverse to Barcelona, and elimination by Bayer Leverkusen in the German Cup, has proved he final straw for the club's board, eager to ensure qualification for next season's Champions League.

A statement on the Bavarian club's official Web site confirmed the decision: "The board have informed Jurgen Klinsmann that we have decided to end our co-operation. This also applies to the assistant coaches Martin Vasquez and Nick Theslof.

"The board has seen the minimum aim for the season come under threat with our recent results and has therefore decided to take this step. The board thanks Jurgen Klinsmann and his coaching team for their work and wish them all the best for the future."

Klinsmann also issued a statement on the official Web site saying: "Of course, I am very disappointed at the moment. Nevertheless, I would like to extend my heartfelt thanks to Bayern Munich, the fans, the coaches, the players and my colleagues for an exciting time. We have laid the foundations for the future. I still believe that the team can be German champions this season."

Talking about the decision, club chairman Karl-Heinz Rummenigge said: "We did not come to this decision lightly. But the results of the past weeks, the way in which they came about and above all, the situation we find ourselves in five games before the end of the season forced us to act out of a sense of responsibility to the club.

"In Jupp Heynckes and Hermann Gerland, we have two experienced coaches who will take over the running of the team until the end of the season."

However, despite remaining in the hunt for the Bundesliga for the majority of the season, there have been many un-Bayern like moments for the club's supporters to endure. The first signs of trouble came last September when Werder Bremen embarrassed Bayern 5-2 in front of their own fans at Munich's Allianz Arena.

The 4-2 German Cup defeat by Leverkusen in March was another low-point, as was the 5-1 hammering at league leaders Wolfsburg earlier this month.

Klinsmann's replacement Heynckes has already successfully coached Bayern, winning two consecutive Bundesliga titles in 1989 and 1990 in his first coaching stint in Munich between 1987 and 1991.

He then coached Athletic Bilbao between 1992 and 1994, Eintracht Frankfurt and Tenerife before moving to Real Madrid where he delivered the Champions League to the Spanish giants in 1998 after a 32-year wait.

A lack of domestic success saw him replaced at the Bernabeu and he had brief stints at Benfica and a return to Athletic Bilbao before heading back to the Bundesliga as coach of Schalke in June 2003.

In June 2006, he was appointed coach of Borussia Moenchengladbach but stepped down after a dreadful run of results that saw the team drop to 17th place in the table after 14 consecutive games without a win.