(CNN) -- Manchester United will carry a slim 1-0 lead into their second leg of their all-English Champions League semifinal against Arsenal. 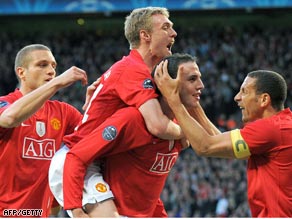 O'Shea's goal gave United a precious lead ahead of the second leg.

A John O'Shea goal after 18 minutes was all the defending champions had to show despite dominating Wednesday's first leg at Old Trafford.

But the manner of their performance will encourage them to believe they can book a place in the final in Rome on May 27 and remain on course to repeat their feat of last season in winning the Champions League and English Premier League.

United manager Alex Ferguson said his team could have put the tie out of reach for Arsenal.

"Arsene (Wenger) will be thinking it has been a good day for him," Ferguson told Press Association.

"He could have been out of the tie but he is not.

"But before the game I said I didn't want us to concede a goal and we achieved that. The tie is not dead but we have given ourselves a good chance."

United started by far the brighter, playing with a high tempo in front of their own fans and it was not long before Manuel Almunia was forced into a brilliant one-handed save to deny Wayne Rooney from Darren Fletcher's cross.

On 16 minutes a cross from the right by O'Shea found Carlos Tevez who was denied by more Almunia heroics, the follow-up effort being parried behind.

From the resulting corner, the ball found its way to Michael Carrick at the far post, the midfielder sending the ball back in via a deflection for O'Shea to score with a first time shot into the roof of the net.

United continued to dominate possession and it took a brilliant reaction save from Almunia to prevent Cristiano Ronaldo scoring from point blank range with a header after a cross from the ever-dangerous Tevez.

The second half followed a similar pattern, but with O'Shea denied the acres of space he was enjoying down the right flank in the first half, United created fewer chances.

The best fell to Ronaldo who sprinted forward just after the hour mark to send a swerving shot past Almunia which rattled the crossbar.

Ryan Giggs came on as a second half substitute for United, his 800th appearance for the Red Devils, and had the ball in the net, but his effort was ruled out by a fractional offside decision.

Substitute Nicklas Bendtner had Arsenal's best opening as the tall striker was first to a free kick but could not deflect his header into the goal.

Goal hero O'Shea said they were satisfied with their night's work.

"Their keeper made a couple of great saves but from the first-half we could have been a couple more up," the Ireland defender told Sky Sports.

"Overall though we have to be happy. We are more than capable of scoring an away goal at the Emirates but it is far from over."

Chelsea held Barcelona 0-0 in the Camp Nou in the first leg of the other semifinal, setting up the prospect of a repeat of last year's final against Manchester United which they lost on penalties.