(CNN) -- Manchester United defender Rio Ferdinand has been passed fit for their crucial Champions League semifinal rematch with Arsenal at the Emirates on Tuesday. 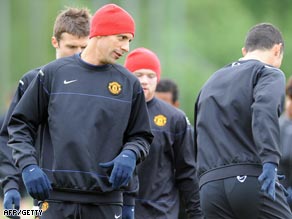 Ferdinand trains at United's Carrington facility ahead of the Champions League clash.

Ferdinand trained with the United squad on Monday morning and manager Alex Ferguson later told CNN that his central defender could line up as they try to defend a slender 1-0 lead from the first leg at Old Trafford last Wednesday.

"Rio is ok. It is important to have him there," Ferguson said. "There was a concern last Wednesday when he had to come off."

In the closing moments of that match, Ferdinand collided with his goalkeeper Edwin van der Sar as they tried to clear a dangerous Cesc Fabregas free kick.

He had to be helped to the dressing room where he alarmed teammates by coughing up blood before spending a night in hospital under observation.

Fortunately, tests revealed he had not broken a rib but had bruised his lung, meaning he missed the 2-0 win over Middlesbrough on Saturday.

While Ferdinand is set to take his place alongside Nemanja Vidic in central defense, Ferguson also revealed good news about left-back Patrice Evra who injured his ankle against Boro and sat out Monday's training at Carrington.

"Evra sat out as a precaution. He should be ok. We will have everyone fit," Ferguson said.

"We are pleased everyone has come through. In a game as important as Tuesday's you want everyone available."

Arsenal, who need to get past United to avoid going another season without winning a trophy, also received good news on the injury front on Monday.

Striker Robin van Persie has been declared fit to take his place after missing the first leg with a groin problem.

The Dutchman's scoring prowess could certainly be needed as Emmanuel Adebayor and Theo Walcott struggled to make an impression in the first leg.

But Arsenal also have a fitness doubt in defense with former United star Mikael Silvestre battling to be fit to take his place.